February 18, 2014
Film
Dead Ringers: Are These Actors the Same Person?

Last week a reporter made the egregious error of confusing Samuel L. Jackson and Laurence Fishburne, while interviewing Jackson, much to the intimidating actor's chagrin. (You can watch the squirm-inducing video here.) The awkward encounter got us thinking: which other actors are constantly being confused for each other? We're not just talking about celebrity doppelgängers. Everyone knows that Zooey Deschanel and Katy Perry look alike, but no one's actually forgetting which one's which. But rather, which actors are so subconsciously interwoven, whether by looks, name, or career, that it often becomes impossible to tell them apart? Here are just a few examples: 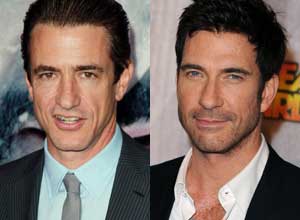 Probably the most classic example on the list. Most of the confusion surrounding these two actors stems from their weirdly similar names, although they do bear some physical similarities, like their wavy dark hair and lantern jaws. The confusion between these two actors is so legendary that it spawned a hilarious SNL skit where unlucky contestants on a game show were forced to try to tell them apart. (Throw Rupert Everett into the equation for extra confusion points.) 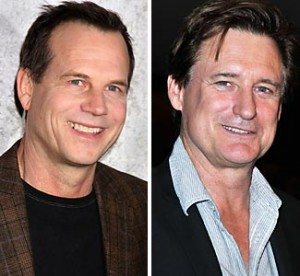 Pop quiz! Which Bill played the President in "Independence Day"? If you answered "Paxton", I'm sorry...you're just as confused as everyone else. That was Bill Pullman. But your confusion is understandable. Both Bills were at the peak of their careers in the 90's, both have the same everyman-type face, and -- well -- both are named Bill P. While Pullman was making a name for himself in "Newsies", "Casper" and "Independence Day", Paxton was busy starring in "Apollo 13", "Twister" and "Titanic". Got 'em straight now? No? Too bad. 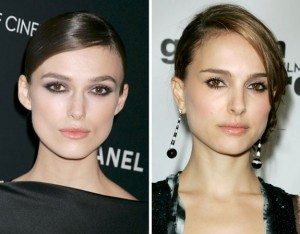 Admittedly, this one's not too much of a problem anymore. But when these two young ladies were both just starting to get famous, it was almost impossible to tell them apart. In fact, they looked so similar that Keira Knightley was cast as Natalie Portman's decoy in "Star Wars: Episode I - The Phantom Menace". That's right. One of Knightley's first film roles, pre-"Pirates Of The Caribbean", was as Sabé, the body double of Queen Padmé. Literally her only job in that movie was to look like Natalie Portman. All we can say is, well done, casting director. Well done. 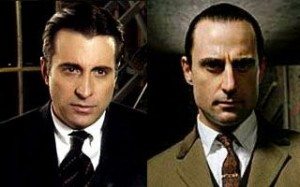 Thankfully, Mark Strong often appears bald, otherwise it would be next to impossible to distinguish between these two actors. Both have dark and brooding exotic features (Garcia is Cuban, while Strong is of Italian descent). Both often play villains (Garcia in the likes of "Ocean's Twelve", Strong in the likes of "Sherlock Holmes"). Things may have just gotten a little easier, since Strong's public profile was recently raised by his starring role in the AMC series "Low Winter Sun". But we bet there will still be people confused about this one for a while. 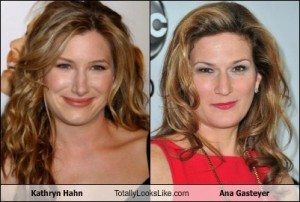 This one's a doozy. Besides looking similar, both these women are incredibly funny, both graduated from Northwestern University, both have done extensive film and TV work, and both have even appeared on Broadway (Hahn in "Boeing Boeing", Gasteyer in "Wicked")! It's a bit easier if you watch SNL, where Gasteyer was a cast member for six years, famous for her celebrity impersonations (Hilary Clinton, Céline Dion, Martha Stewart). For the rest of us, we're left scratching our heads over which one was in 115 episodes of "Crossing Jordan" (Hahn), which one played Lindsay Lohan's mom in "Mean Girls" (Gasteyer), which one guest starred on both "Parks And Recreation" and "Girls" last year (Hahn again), and which one currently stars on "Suburgatory" (Gasteyer again). Oofdah. 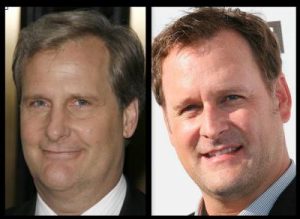 I'm about to blow your mind. Are you ready? Jeff Daniels did NOT play Uncle Joey on "Full House". I know, crazy, right?? I'll give you a moment to recover.

Okay. If you thought Daniels starred on "Full House", you're far from the only one. It doesn't help that most of us were fairly young when that sitcom was on, which means we probably didn't know many actors by name anyway. While Coulier has gone on to cultivate a career in voice work and standup comedy, Daniels is a respected film and TV actor currently starring in HBO's "The Newsroom". (And no, Jeff Daniels and Jeff Bridges are not the same person, either.) 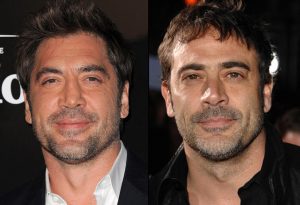 Try telling me that's not two pictures of the same man. Just try. You can't! Bardem and Morgan look so similar they could be long lost identical twins. (Except when Bardem is rocking his "No Country For Old Men" bowl cut, that is.) Thankfully, they have careers in two different mediums. While Bardem is famous for his roles in movies like "No Country" and "Vicky Cristina Barcelona", Morgan is known mostly for TV shows like "Magic City", "Grey's Anatomy" and "Supernatural"...although he's done his fair share of movies too, like appearing as The Comedian in 2009's "Watchmen", so never mind. You will remain perpetually confused. 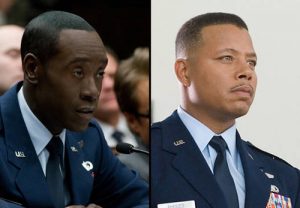 These men don't actually look much alike, but there are plenty of other reasons to be confused about which one is which. They were nominated for Best Actor Oscars in consecutive years (Cheadle in 2005 for "Hotel Rwanda" and Howard in 2006 for "Hustle & Flow"). They both starred in "Crash". And they've both appeared in the "Iron Man" franchise...in the SAME ROLE. Howard originated the part of Rhodes in the first "Iron Man", and Cheadle took over for him for both "Iron Man 2" and "Iron Man 3". Confused? You're not alone. 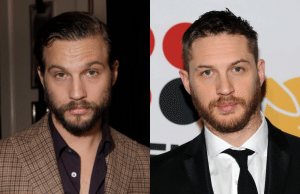 Again, you could tell someone that these two men are twins separated at birth and they would probably believe you. It doesn't help matters that both men are mostly known for their performances in supporting roles in acclaimed dramas: in the summer of 2012, Green was appearing as lead scientist Holloway in "Prometheus" while Hardy was tearing it up in the theater next door as Bane in "The Dark Knight Rises". These two men, born less than a year apart, seem put on this earth to star in a reboot of "The Parent Trap" (one about adult men instead of prepubescent Lindsay Lohans). Heck, one of them is American (Green) and one is British (Hardy)! It's perfect!

Seriously, which one is which??? NO ONE KNOWS.

Which actors do you always get confused? Are Javier Bardem and Jeffrey Dean Morgan actually the same person? Can you tell the Olsen twins apart? Tweet us @Stagebuddy to let us know!