He's twenty-five and full of imagination that brings his fantasies to life in remarkable ways.  Catch Ian, a webseries about a daydreamer who might still be a virgin.  The popular web show plays on Stage17.tv, where you can see what a lot of Broadway actors are doing when they aren't on stage.  StageBuddy spoke with the writer and director Ross Evans about his inspiration behind the show, his favorite genre and the film magic that happened while on set.

StageBuddy: What inspired you to write this show?

Ross Evans: I know this is going to sound crazy from the person who wrote, directed and starred in the show, but the impetus for Ian was a need to collaborate. Each episode of Ian isn’t really about Ian, it’s about the guest star. It’s this really great comedic formula that was stumbled upon by Jerry Seinfeld and Larry David, and even Louis C.K. to an extent. In fact, you could probably trace it back to Woody Allen if you wanted. Your protagonist is the impetus for the story, but it’s the characters around them that do all the heavy lifting. The fact that none of those people are particularly terrific actors, allows them to glorify the genius of their co-stars. If you watch Ian closely, you’ll notice that even in the way the show is edited, it’s all about the world outside of Ian and not Ian himself. That was really fun for me, that even in this fantasy world where Ian’s cast himself as the star he’s still in a way playing second fiddle. What I’m so proud of about Ian are the glorious performances of all the great actors in this series. They are some of my favorite people in New York and writing Ian was my opportunity to show them off. 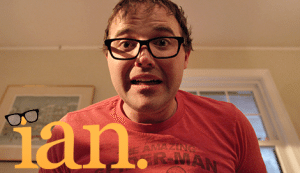 SB: In, Ian, you explore a new genre in each episode. As a writer, how do you dive into every genre you explore?

RE: Before writing every episode of Ian, I’d watch a few movies from the genre and then I’d spend countless hours on websites devoted to that particular cinematic niche. Funnily enough, I actually found the discussion boards on film genres even more helpful than the research that I did on the genres themselves. When you’re satirizing something, it’s important to remember that it’s not about mimicking the genre, but instead paying homage to the cultural impressions left by the genre.

SB: How would you describe the show?

RE: The show is weird and funny and romantic and weird. At the heart of Ian is this idea that fiction is almost universally superior to reality, but that’s no way to live. Fiction works best when you’re using it to infuse your reality, not hide from it. Ian’s a webseries with a big heart and big laughs. It’s sort of exhibiting what I think are the two pronged essentials for creating art of this genre. People aren’t going to laugh if they don’t care, and they’re not going to care if they don’t smile.

SB: As a character, what does he learn from each daydream sequence?

RE: Ian learns that day dreaming is a fantastic thing if it isn’t dampening your own reality. Whether we act on them or not, all dreams have repercussions. Our dreams have the power to fuel us, depress us, engage us, propel us, deflate us, and everything else in between. By the end of season 1, Ian really learns that dreaming can give us courage. Dreams always present us in a more spectacular light than anything happening in our current reality. And that leaves us with two choices, to dampen our dreams or brighten our reality. Ian is ready to add some wattage. 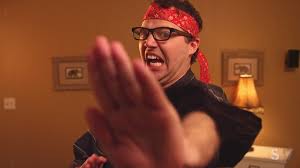 SB: If Ian was a cartoon character, who would he be and why?

RE: Ian’s pretty much already a cartoon character, so there isn’t a big stretch going on in animating him. In Season 2 of Ian, I really want to do an animated episode, so hopefully we’ll all get to see what the looks like. But I guess that isn’t really the really question. So, I’m saying Ian would be the love child of Pepé Le Pew and Chuckie from Rugrats. A scared, neurotic little boy who wishes he was a Lothario.

SB: Any fun stories from filming?

RE: We filmed the entire series over the course of three days, which was utterly exhilarating and completely absurd. But a good kind of absurd. To work within the confines of that schedule, we had to get really creative with the way we shot. We had to compile these huge lists of every shot we could achieve while the camera was pointing in one direction in order to minimize set-up time. If you’ve seen the series, you’ll notice that a few episodes begin and end with Ian in his living room. We shot all of those in succession, with Ariana and I madly changing outfits in-between takes. That also meant that we had to get everything in one or two takes. As I was serving as both actor and director on set, that presented some huge challenges. Before filming each take, I would hit my mark as actor, then turn around and check the framing on the director’s monitor, then talk through the scene with my scene partner before calling quiet on set and counting down to action. After the take, I’d yell out to our A.D. “Did we get it?” Then, he’d give me a thumbs up or thumbs down and we’d be on our way.

SB: What's your favorite genre to explore to date?

RE: The film noir.  We filmed in the absolute dead winter a few hours before a major snow storm. As the crew is outside getting everything prepared, Katie and I were huddled inside over this tiny space heater discussing the scene. Our director of photography comes flying in through the door screaming: “We gotta go. We gotta go, NOW!” So, Katie and I gather are things, and we step outside into this magnificent snow flurry. I look over at the DP and he has this gigantic grin plastered to his face. In my mind, I’d always pictured the film noir in a back alley in the middle of heavy rain storm, but the webseries gods completely topped anything I could have hopped for. They blessed us with this soft, majestic snow fall that was flittering down from the skies right on to our set. It would have cost a million dollars to replicate that atmosphere. It was the most serendipitous artistic moment I’ve ever been apart of. To be honest, I started choking up. It was like the weather gods were smiling on our little team, blessing us in a way. It was a sign for me that the hard work we were putting in was worth it. You look at the finished product of that film noir episode and that snow is so perfect and so gorgeous. The weather did a better job of capturing the essence of film noir than my script could have ever hoped to achieve.

You can watch episodes of "Ian" at Stage17.tv