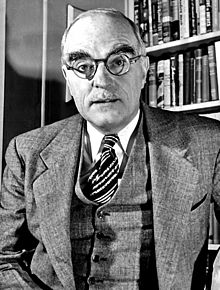 Free to everyone. All ages welcome.

Bernice by Thornton Wilder will perform at 3 pm on Saturday, August 13 at the Trenton Free Public Library in Trenton, NJ. The performance is free to the public, and suitable for all ages.

Bernice takes place in Chicago in 1911, when George Walbeck (Drew Clark) returns home after serving eight years in prison for embezzlement. His lawyer Mr Mallison (Mikey Miller) has hired a maid named Bernice (Saima Huq) to help out when George Walbeck is brought home by his driver (Bobby Guenther.) Bernice has specifically chosen to work in this house as she has served time in prison herself.

The play is part of the Thornton Wilder Summer Series coordinated by Supervising Librarian Shanshan Ming and directed by Saima Huq. Past plays include: The Happy Journey to Trenton and Camden, Cement Hands, The Wreck on the 5:25 and The Rivers Under the Earth.

The American playwright and writer Thornton Wilder (pictured in photo) taught French from 1921 to 1928 at The Lawrenceville School in Lawrenceville, NJ. He won three Pulitzer Prizes for his literary works The Bridge of San Luis Rey, Our Town and The Skin of Our Teeth, and a U.S. National Book Award for the novel The Eighth Day.

Always Love Lucy Theatre was founded in 2014 by producer and director Saima Huq, whose hometown is Trenton, NJ.

Further information about this and other events at the Trenton Free Public Library can be found at www.trentonlib.org