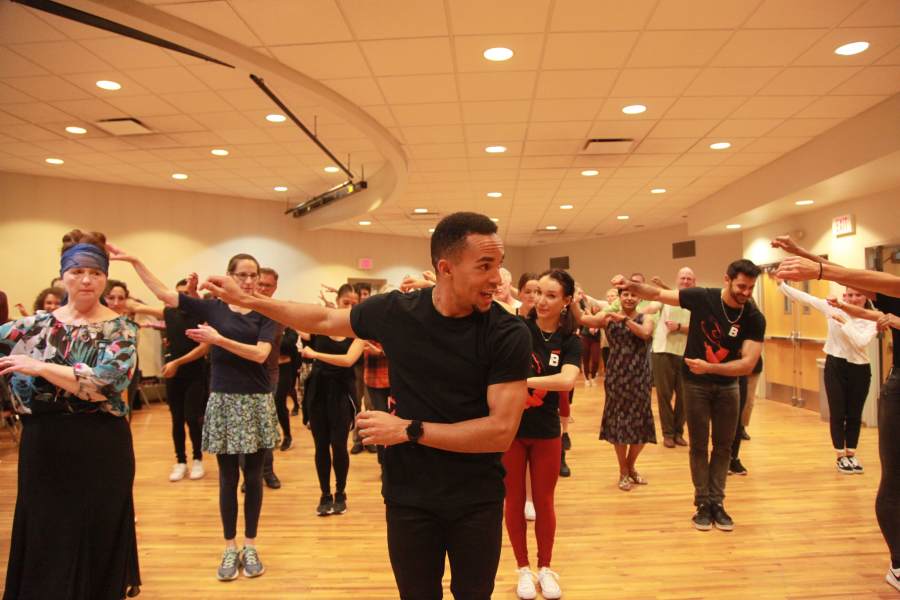 Ballet Hispánico, the nation’s renowned Latinx dance organization recognized as one of America’s Cultural Treasures, partners with DOROT, a New York City-based nonprofit organization creating social connections for older adults, to present a virtual performance and artistic talkback with Rodney Hamilton, Michelle Manzanales, and Melissa Verdecia on Thursday, May 13, 2021 and two virtual movement workshops on Thursdays May 20 and 27, 2021.

Virtual Performance + Artist Talkback
Thursday, May 13, 12:30 PM – 1:30 PM ET
A live stream of Ballet Hispánico’s En Familia, a virtual performance narrated by Artistic Director and CEO Eduardo Vilaro showcasing excerpts from the company’s repertoire – Con Brazos Abiertos and Club Havana. The performance will be followed up by a Q&A featuring some Ballet Hispánico artists and educators. To register and receive the link, visit: https://zoom.us/meeting/register/tJAtc-mrqjIrGdxFiLbsIKYtIghCX3fGhiKg

Club Havana (2000)
Latin dancing at its best. The intoxicating rhythms of the conga, rumba, mambo, and cha cha are brought to life by choreographer Pedro Ruiz, himself a native of Cuba, as he imagined his very own “Club Havana.”

Con Brazos Abiertos (2017)
Michelle Manzanales explores with humility, nostalgia and humor the iconic Mexican symbols that she was reluctant to embrace as a Mexican-American child growing up in Texas. Intertwining folkloric details with a distinctly contemporary voice in dance, set to music that ranges from Julio Iglesias to rock en Español, Con Brazos Abiertos is a fun and frank look at a life caught between two cultures.

Movement Workshops
Thursdays, May 20 and 27, 12:30 PM – 1:30 PM ET
Join us for two fun and interactive movement workshops that will focus on the cultural context and techniques of traditional, social, and/or contemporary dance forms that are derived from the multicultural Latinx experiences. The May 20 workshop will specifically explore the Salsa, and the May 27 workshop will explore the Mambo. We welcome all levels and abilities. Led by Rodney Hamilton, a Ballet Hispánico Teaching Artist. To register and receive the link, visit: https://zoom.us/meeting/register/tJUoce6grzgsG91ejLUPfNcJ6_TdrkU5yid8.

About the Speakers
Rodney Hamilton began his training in his native St. Louis at several schools including Carr Lane V.P.A., the Center of Contemporary Arts, and Alexandra School of Ballet. He also studied with Ms. Katherine Dunham and joined the chorus at the MUNY where he performed for seven years. After arriving in New York City, he graduated with a BFA in Dance from the Juilliard School and joined Ballet Hispánico where he was a principal dancer and assistant rehearsal director for 10 years. During this time, he performed works by José Limon, Paul Taylor, Hans van Manen, Robert Battle, Ohad Naharin, David Parsons, William Whitener, Ann Reinking, Ramón Oller, Sergio Trujillo, Trinette Singleton, Agnes DeMille, Talley Beatty, Annabelle Lopez Ochoa, Vicente Nebrada, and numerous other well-known choreographers. Mr. Hamilton was part of the national touring cast of Hello Dolly with Carol Channing and worked with the Broadway cast of Tarzan during its workshop process. In 2012, Mr. Hamilton became the Resident Choreographer for the Saint Petersburg City Theater in Florida where he choreographed Hello Dolly, Footloose, and Memphis. Mr. Hamilton holds an MFA in Dance from NYU Tisch School of the Arts. He has taught ballet, modern, and Dunham technique all over the world. Mr. Hamilton is Ballet Hispánico’s faculty member at the School of Dance and BHdos Rehearsal Director.

Michelle Manzanales is a choreographer and dance educator originally from Houston, TX. Before being named director of the School of Dance in December of 2016, Manzanales was in the midst of her seventh season as the Ballet Hispánico Company rehearsal director and artistic associate. Her choreography, Con Brazos Abiertos, premiered during Ballet Hispánico’s 2017 spring season at The Joyce Theater. This “savvy but deeply sincere meditation on her Mexican-American background” (-Marina Harss, The New York Times) has since toured extensively to critical acclaim, including its inclusion in New York City Center’s 2018 Fall for Dance Festival. “This dance isn’t just about one girl’s experience; it applies to everyone, of any gender, and of any culture,” said CriticalDance. Other acclaimed works by Manzanales include her 2010 homage to Frida Kahlo, Paloma Querida, which was hailed a “visual masterpiece” by Lucia Mauro of the Chicago Tribune and was described by the Chicago Sun-Times as a “gorgeously designed, richly hallucinatory, multi-faceted vision of the artist.” Her 2007 choreography for Luna Negra Dance Theater, entitled Sugar in the Raw(Azucar Cruda), was applauded by the Chicago Sun-Times as “a staggering, beautiful, accomplished new work.”

Melissa Verdecia is from Miami, FL and received her early training from Caridad Espinosa, Mencia-Pikieris School of Dance, and New World School of the Arts, where she graduated summa cum laude in 2008. In 2012, Verdecia went on to earn her BFA in dance from The Juilliard School, where she performed works by Sidra Bell, Alex Ekman, Nacho Duato and Jerome Robbins, among others. Verdecia was selected as a modern dance finalist in The National YoungArts Foundation competition in 2008, and was featured in the HBO series MasterClass. In 2016, Verdecia had the joy of being presented beside her Ballet Hispánico colleagues in Lincoln Center at the Movies: Great American Dance Series, where she performed lead roles in works by Gustavo Ramírez Sansano and Pedro Ruiz. This is Verdecia’s 9th season with Ballet Hispánico.

About DOROT
DOROT is a nonprofit organization that alleviates social isolation among older adults and provides services to help them live independently as valued members of the community. DOROT serves the Jewish and wider community, bringing the generations together in a mutually beneficial partnership of elders, volunteers and professionals.

Summer Nights on The Hudson At Skinnys Cantina
Nai-Ni Chen Dance Company The Bridge Classes June ...
Theater Resources Unlimited announces the cast of ...
The International Association of Blacks in Dance A...