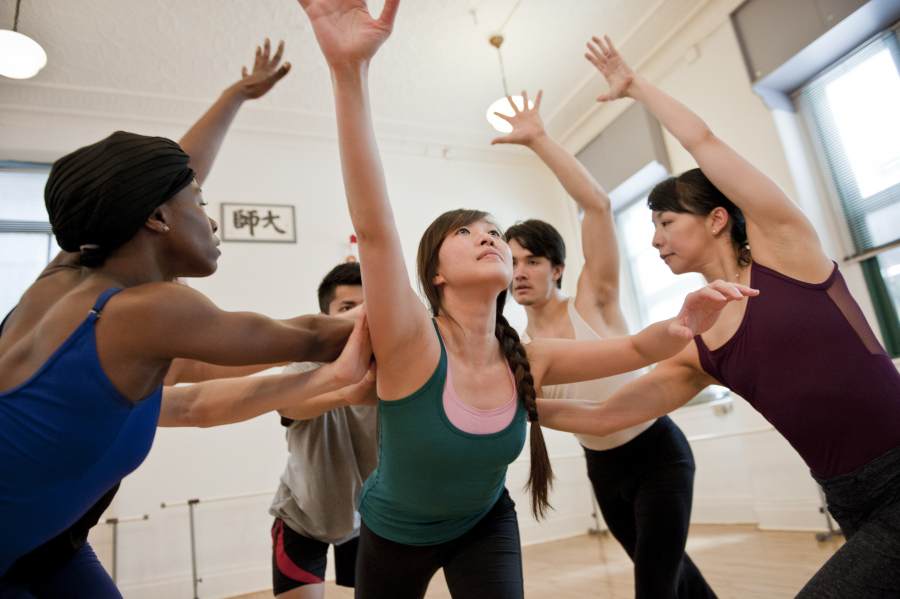 On Sunday, September 29th, at 5pm, H.T. Chen & Dancers will perform two excerpts from their repertory: South of Gold Mountain draws from rich oral histories and treasured images of Chinese settlers. “They were lured to America by the promise of gold and a better life in the southern states before World War II,” stated CDC’s Artistic Director H.T. Chen. “The Chinese helped build America by working on the Transcontinental Railroad, levees, and plantations, and as grocers,” said Associate/Education Director Dian Dong. “We want to memorialize our Chinese American history and our legacy with descendants. We need to celebrate our ancestors’ accomplishments with those who are vaguely familiar with the facts of Chinese immigration or have no knowledge of them at all.” Transparent Hinges is an abstract journey of the Chinese in America, from the past to the present, combining modern dance with movement from traditional movement arts. Evoking the past are images of the first arrivals of ‘dreamers’ in the US to San Francisco’s Angel Island Immigration Station, where Chinese immigrants were detained (from 1910 to 1940 due to anti-Chinese legislation and prejudice), to the present day struggles and repression with the use of a yellow flag to symbolize the 1960s Yellow Power movement.

On display in Chen Dance Center’s studio, will be a retrospective of award-winning images by illustrious photographer Corky Lee. “I’m capturing monumental historical events of Asian Americans’ struggle for civil rights, often overlooked by mainstream media, which should be a part of American history,” said Mr. Lee. His interest in photojournalism was sparked in 1970 upon reviewing the photograph commemorating the 1869 completion of the Transcontinental Railroad. The second-generation Chinese American was “struck by the fact that there were no Chinese workers in the photo depicting representative laborers although 15,000 of them had worked and sacrificed their lives in its construction.” In 2014, as an act of “photographic justice,” Mr. Lee went to Promontory Point, Utah, where the original picture had been taken. He reshot the photo with 200 Chinese Americans (including workers’ descendants) from across the country, correcting their absence from 145 years before as a “neglected and forgotten piece” of Asian American history. A documentary entitled Photographic Justice: The Corky Lee Story is in final stages of production.

There will be two post-performance discussions: The first led by Ms. Dong will emphasize the importance of the first Chinese American Heritage Week, recognition of Chinese laborers on the 150th anniversary of the Transcontinental Railroad, and the impact of Corky Lee’s work on the Asian American community. Speakers include H.T. Chen, Corky Lee, actress Virginia Wing (the Mississippi native and research contributor, is heard in South of Gold Mountain’s score), and Kim Chan (descendant of a Transcontinental Railroad worker and whose mother’s voice is heard in parts of the score).

A second discussion will focus on the Chinese American World War II Veteran Congressional Gold Medal Act (signed into law on Dec. 20, 2018 by President Trump, paying tribute to the 20,000 Chinese American veterans who served our country in World War II despite prevalent discrimination at the time). Veterans from Chinatown’s American Legion Post 1291 will share stories of the men and women who enlisted in each branch of the armed services.

On Friday, October 4th at 6pm, Chen Dance Center will present a film screening of H.T. Chen’s Transparent Hinges (1996) whose title refers to the “hyphenated Americans” of dual heritage. “This is a filmed presentation of the dance performance,” stated Ms. Dong. “The full work has not been seen in over 20 years. We no longer have the enormous set pieces and sadly, this film cannot capture the full experience of the live performance.” Based on extensive research, personal interviews, and visits to the “Ellis Island of the West,” it is a tribute to the perseverance of Chinese American laborers of the Transcontinental Railroad and the adversity faced by immigrants detained at Angel Island.