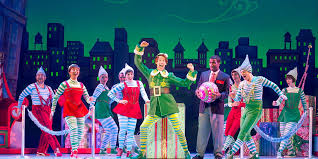 Interview: “Elf The Musical’s” Christopher Russo on Holiday Traditions and Finding the Heart Within Walter Hobbs

As any Elf aficionado can tell you, the best way to spread Christmas cheer is singing loud for all to hear… and no one knows that statement to be true more than multitalented tour actor Christopher Russo. He may play the grouchy, Grinchy Walter Hobbs in the national mini-tour of Elf the Musical, the splashy stage adaptation of the 2003 smash hit film, but in reality, he’s an uber-kind, ever-jubilant anti-Scrooge for whom Christmas could never get “in the way.” In recent years, the hands-on dad of former School of Rock standout Isabella and loving husband to adoring wife Kristi has spent a number of Christmases on the road, as a result of a decade-long tour with the first national company of Wicked. (That’s a fact, not a gripe… he absolutely loved every minute). But for now, he’s happy to be “home for the holidays,” back in New York for a three-week stint at the Theatre at Madison Square Garden, the final leg of a three-month journey that’s brought him to cities throughout Virginia, Michigan, Ohio and Toronto, to name a few, allowing him to spread laughter, joy and holiday cheer to the American public at large. On a break from his packed performance schedule in Boston, we caught …Read more