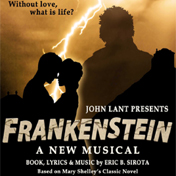 Frankenstein, A New Musical based on Mary Shelley’s classic novel, is a two-act sweeping, romantic musical that honors its source material.

Having lost his mother at a young age, Victor Frankenstein seeks to end man’s mortality and arrogantly enters territory beyond his control. While he enjoys unconditional love from Elizabeth, he grants none to his creation.

Why is it so hard to create a successful adaptation of Mary Shelley’s Frankenstein? That was the question I pondered as I watched Eric B. Sirota’s new Frankenstein musical, directed by Clint Hromsco at St. Luke’s Theatre. And as far as Frankenstein adaptations go, Sirota’s musical isn’t bad. In fact, the piece explores in depth a few elements that have gotten short shrift in previous Frankenstein adaptations (and even in the novel), and Sirota’s script creates interesting nuances through parallel scenes and echoing lines. But I wouldn’t call this the ultimate Frankenstein adaptation, either. For one thing, it breezes over certain major plot points, such as the death of William and Justine, and focuses heavily on the romance of Victor and Elizabeth at the expense of other important points, such as Victor’s rejection of his Creature. However, Danny Bristoll’s Creature is so expertly-played, he almost succeeds in closing the gap. Bristoll’s booming vocals and full-of-feeling performance make the Creature’s musical narrative to Victor — in which he tells about leaving the laboratory, learning to speak and read, and being shunned by mankind — nearly a showstopper. The Creature’s despe …Read more