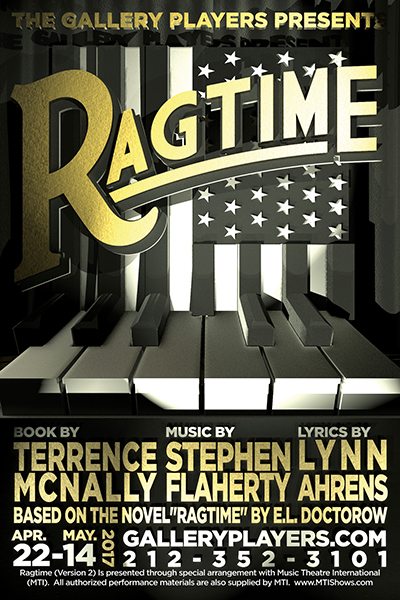 Ragtime is a musical with a book by Terrence McNally, lyrics by Lynn Ahrens, and music by Stephen Flaherty. The music includes marches, cakewalks, gospel and ragtime.

Based on the 1975 novel by E. L. Doctorow, Ragtime tells the story of three groups in the United States in the early 20th century: African Americans, represented by Coalhouse Walker Jr., a Harlem musician; upper-class suburbanites, represented by Mother, the matriarch of a white upper-class family in New Rochelle, New York; and Eastern European immigrants, represented by Tateh, a Jewish immigrant from Latvia.

Ragtime, I hope they stay in business for 50 more years. Ragtime (by Terrence McNally, Stephen Flaherty, and Lynn Ahrens) traces the lives of various characters in turn-of-the-century New York. These include an upper-class family, a poor Jewish immigrant, and a Harlem musician, along with a smattering of historical celebrities. With an exuberant score and powerful lyrics, Ragtime has been hailed as one of the best musicals to appear in the last few decades. And in the hands of The Gallery Players, Ragtime flourishes. Under the capable direction of Mark Harborth and his talented cast, the musical is compelling, entertaining, and heart-wrenching. In the role of Sarah, Renee Steadman dazzles. Both her amazing vocals and her convincing performance mark her as one of the stand-out stars of the play. But that’s not to say Steadman is the only star. As Mother, Heather Koren also shines, as do James Zannelli as Tateh and Marcus Jordan as Coalhouse Walker. All four actors combine soaring vocals with a heartfelt performance, and similarly talented performers fill out the other roles. Alex Bird is perfect as Younger Brother, and Elyse Beyer and Doug Chitel bring incredible energy and force to …Read more