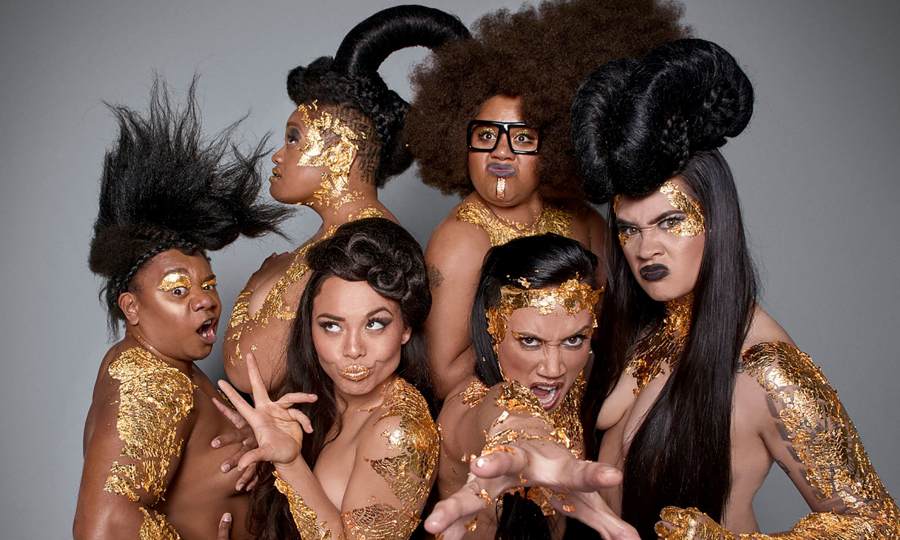 NYU Skirball will present the American premiere of Hot Brown Honey, a riotous celebration of Hip-Hop politics, dance, comedy, circus, striptease and song, featuring a bevy of powerful First Nation women from Aboriginal Australian, Samoan, Tongan, Indonesian, Maori and South African backgrounds. With their own brand of fierceness, these six sexy, sassy and stylish women boldly shatter preconceptions in an explosion of color, culture and controversy. Hot Brown Honey won the Edinburgh Fringe’s prestigious Total Theatre Award in 2016. (or ages 16 and above.)

Hot Brown Honey is part of Stonewall 50, NYU Skirball’s year-long commemoration of the 50th Anniversary of the historic Stonewall Uprising, which took place only blocks from the NYU Campus. The celebration features special events, marches, panels and parties.

Briefs Factory is an internationally recognized independent artist and producer’s collective dedicated to developing and presenting bold, contemporary and inspiring collaborative work. The company established itself as a leader on the cabaret and circus world stage following the success of their flagship show Briefs, which took Edinburgh Fringe by storm in 2011. Their second show, Briefs: The Second Coming, won Best Circus at Perth Fringe in 2013 and 2014; and sold out consecutive runs in London, Perth, Adelaide and Edinburgh Festival. Briefs Factory’s other award- winning works include Hot Brown Honey, Club Briefs and Briefs: Close Encounters. briefsfactory.com

TICKETS
Tickets for Hot Brown Honey begin at $40 and can be purchased online at www.nyuskirball.org, by phone at 212.998.4941, or in person at the Box Office, 566 LaGuardia Place at Washington Square: Tuesday-Saturday, 12:00–6:00 P.M. NYU Skirball is located at 566 LaGuardia Place at Washington Square, New York, New York 10012. www.nyuskirball.org
ABOUT NYU SKIRBALL

Jay Wegman is the Director of NYU Skirball Center for the Performing Arts. Prior to Skirball, he served as Director of the Abrons Art Center for ten years. During his tenure, Abrons was awarded various honors, including a 2014 OBIE Award for Innovative Excellence and a 2015 Bessie Award for Best Production. He was also a Fellow at the John F. Kennedy Center for the Performing Arts in Washington, D.C., and for over a decade served as the first Canon for Liturgy and the Arts at the Cathedral of St. John the Divine. He is the recipient of the 2015 FRANKY award for “making a long-term, extraordinary impact on contemporary theatre and performance in New York City.” While not a performer, he has appeared in Brian Roger’s film “Screamers” (2018), Sibyl Kempson’s “12 Shouts to the Ten Forgotten Heavens” (2017), and “Romper Room” (1969). Jay is a graduate of Yale University. www.nyuskirball.org.