POST A SHOW
Ice Theatre of New York presents Pivoting Through the Pandemic
Dance, Other 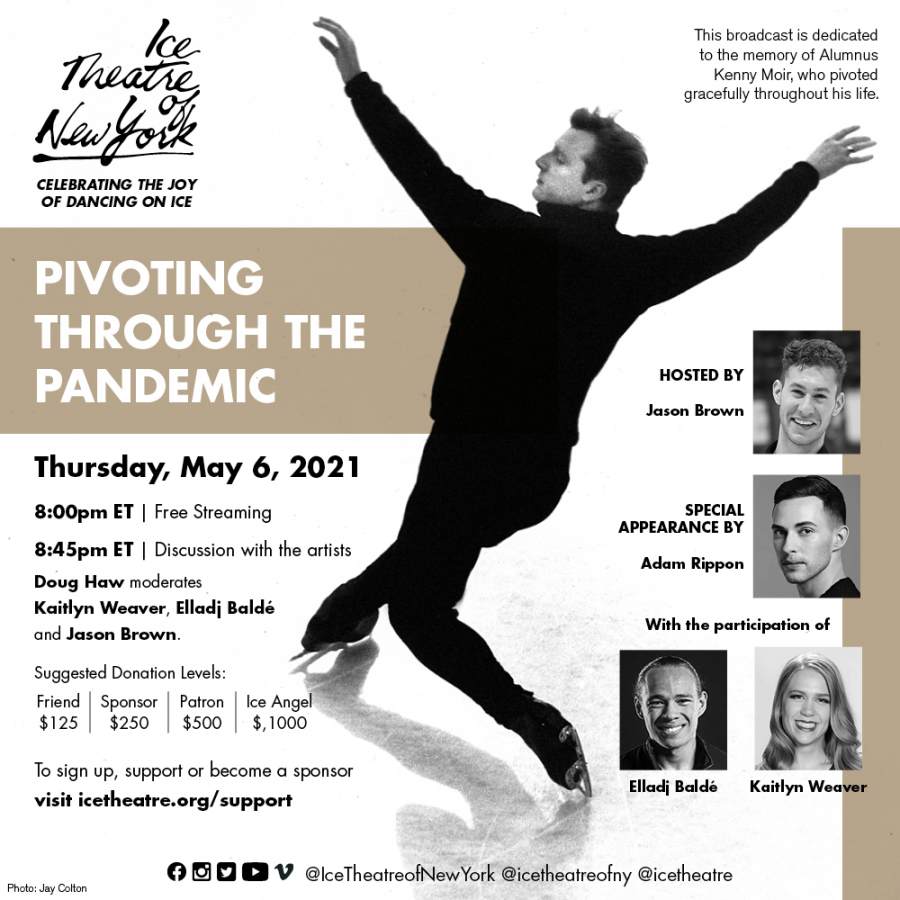 Ice Theatre of New York (ITNY) presents Pivoting Through The Pandemic featuring the Company and champion ice artists Jason Brown, Kaitlyn Weaver and Elladj Balde, with a special appearance by Adam Rippon on May 6, 2021 at 8:00pm ET. The evening will include two new ITNY repertory pieces, a reflection on the past year and a look forward to the 35th Anniversary Celebration of the Company. For more details and to RSVP for the evening, visit icetheatre.org/support.

The broadcast will be followed at 8:45pm ET by a discussion with the artists, open to supporters who make a donation of $125 or greater at icetheatre.org/support. Suggested donation levels include Friend $125, Sponsor $250, Patron $500, Ice Angel $1,000. All donations will benefit ITNY’s future programming, including ITNY’s 35th Anniversary celebrations in the spring of 2022.

“It occurred to me that with all the talk about pivoting through the pandemic, that since skating has an actual move called a ‘pivot,’ it would be a great idea to do a socially distanced ensemble piece appropriate for these times,” said Moira North, founder and artistic director of ITNY. “We were delighted to commission Joel Dear for the choreography of “Pivoting” and Jordan Cowan from On Ice Perspectives to film this unique piece.”

About Ice Theatre of New York
Founded by Moira North, ITNY’s mission is to celebrate and advance dance on ice as a performance art. Through its performances in both traditional and site-specific venues, ITNY presents ice dance that helps to open one’s eyes to seeing skating in new and unexpected ways. ITNY was the very first ice dance company to receive dance program funding from the National Endowment for the Arts, the New York State Council on the Arts and the New York City Department of Cultural Affairs. www.icetheatre.org