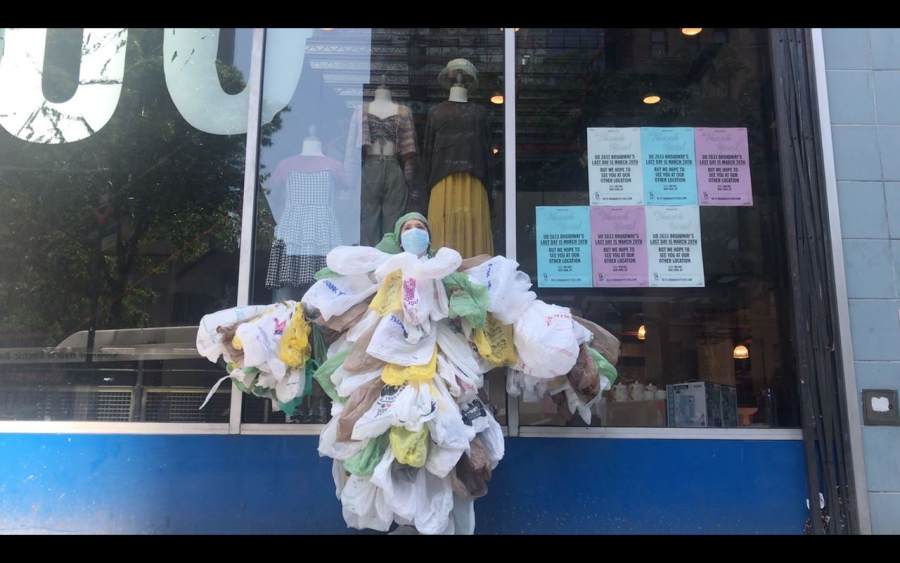 Time Lapse Dance continues its 20th Anniversary celebrations with a variety of virtual programming over the coming weeks including the release of two new dance films, free workshops taught by choreographer Jody Sperling and company dancers, an open rehearsal, an online release, and a choreographer-composer conversation. http://timelapsedance.com/events/tldat20/

A major highlight of the upcoming month is the release of two new short films exploring environmental themes. In Single-Use (release date July 22), Sperling swirls on city streets in a costume made from more than 100 plastic bags. The film short Fly (release date July 29), is a stop-motion play of the body in nature. A later highlight is the online release of Ice Cycle (August 6), followed by a choreographer-composer conversation.

Week 8: Go Plastic Bag Free
Friday, July 3 from 11:30-12:15pm – Open Rehearsal with Time Lapse Dance
Click to Register
Celebrate International Plastic Bag Free Day by visiting an open rehearsal exploring the use of plastic bags as costuming and props. We are experimenting with creating real-time virtual dance experiences and invite you to be part of the process.

Week 9: TLD Dancer Spotlight – Free Kids Workshop with Anika Hunter
Saturday, July 11 at 10am
Click to Register
Fun and free dance movie-themed workshop for kids (under 10) with Anika Hunter. Kids will get to jam out with their favorite characters and tunes.

Choreographer Jody Sperling releases her new film, Single Use, in which she dances on city streets in a costume fashioned from over 100 reclaimed plastic bags. Like a plastic monster she romps and rolls on pavement transforming into natural-seeming forms. The piece is a mediation on the nature of disposability and resuscitation. Following the release, stay tuned for a conversation with choreographer Jody Sperling and Beyond Plastics Founder Judith Enck on the urgent problem of plastic pollution.

Choreographer Jody Sperling releases Fly, a new short film exploring the relationship of the moving body to the natural world. The film uses stop-motion techniques to animate Sperling’s body in ways that echo the dynamics of her wooded surroundings. The film grows out of Sperling’s emerging environmental dance practice called ecokinetics.

Thursday, July 30 at 10am – Ecokinetics Workshop
Click to Register
Ecokinetics is Sperling’s emerging practice which focuses on cultivating a dynamic relationship between the moving body and the environment, whether human-made or natural. The human mover practices attuning to and embodying environmental and atmospheric motion patterns. In the process, the practitioner becomes sensitized to the body’s energetic impacts on the surrounding micro-climate. Ecokinetics is a corollary to ecoacoustics, a mode of environmental music composition pioneered by Sperling’s long-time collaborator, Matthew Burtner.

Ice Cycle was the first collaboration between composer Matthew Burtner and choreographer Jody Sperling, both known for their creative engagement with climate change. Inspired by Sperling’s experience dancing on Arctic sea ice, during her 2014 residency with a polar science mission, the work expresses the fragility and dynamism of the icescape. Danced by six women, the piece gels in crystalline formations and explores the dynamic interplay of ice and water in the process of melting.

Jody Sperling is dancer-choreographer from NYC and the Founder/Artistic Director of Time Lapse Dance. She has created 45+ works including many furthering the legacy of modern dance pioneer Loie Fuller (1862-1928). Considered the preeminent Fuller stylist, Sperling has expanded the genre into the 21st century, deploying it in the context of contemporary and environmental performance forms. She was nominated for a 2017 World Choreography Award for her work on the French feature film “The Dancer” (premiere 2016 Cannes Film Festival) inspired by Fuller’s life. Her work is also prominently featured in the forthcoming Fuller documentary “Obsessed with Light,” directed by Sabine Krayenbuehl and Zeva Oelbaum. Years of working in Fuller’s idiom, which involves kinesphere-expanding costumes, has influenced Sperling’s awareness of the body’s relationship with the larger environment. In 2014, she participated in a polar science mission to the Arctic as the first, and to date only, choreographer-in-residence aboard a US Coast Guard icebreaker. During the expedition, she danced on Arctic sea ice and made the short dance film Ice Floe, winner of a Creative Climate Award. Following that experience, Sperling has developed programs transporting the icescape to the stage and incorporating climate outreach. Current projects focus on creating visual-kinetic narratives merging choreography and climate science.

Time Lapse Dance (TLD), is an all-women 501(c)3 dance company founded by Jody Sperling in 2000. The company’s mission is to forge dynamic connections between dance and movements in culture, history, science, the visual arts, and music. The work aims to investigate the relationship of the moving body to the world we inhabit through live performance, educational programs, and media production. TLD has two special priorities. First, cultivating climate literacy through the performance of new choreography (for stage, screen or street) that echoes the natural world, and the programming of outreach that merges concepts and communication strategies from scientific and artistic practices. Second, advancing the legacy of Loie Fuller by reimagining the art of performance technologist Loie Fuller (1862-1928) in an innovative and environmental context through the creation of new performance, media, research, and publications, that resonate with the 21st century public. Since inception, TLD has presented 16 seasons in Sperling’s native NYC and toured to performing arts centers nationally and internationally. Along with performances, TLD offers outreach on arts/climate, family programs, workshops, and masterclasses. TLD has received commissions from Marlboro College/Vermont Performance Lab, University of Wyoming/NEA American Masterpieces, and the Streb Lab for Action Mechanics.
#

This program is supported, in part, by public funds from the New York City Department of Cultural Affairs in partnership with the City Council and with support from Dance/NYC’s Covid Relief Fund.