POST A SHOW
Live Recording of ANIMAL WISDOM At Town Stages
Off-Off, Other, Other Music 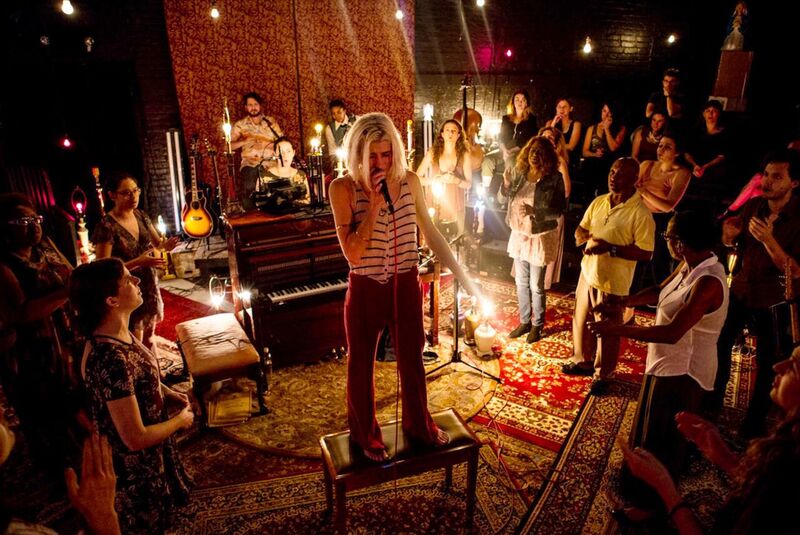 Heather Christian and the ANIMAL WISDOM family present in a Live Recording of a Blackout Requiem Mass on Thursday and Friday, All Saints and All Souls Day, November 1 & 2, 2018 at 7pm and 9pm at Town Stages, 221 West Broadway, NYC.

One year after the thrice-extended sold-out ten-week run at The Bushwick Starr, the ANIMAL WISDOM family is getting back together to make a much anticipated soundtrack recording. Part fund-raiser, part mini-mass, part barn-raising revival, the ANIMAL WISDOM Live Taping will take place at Town Stages with a larger ensemble, newly fleshed-out arrangements, and the full complement of the original ANIMAL WISDOM choir, plus more than 40 additional special guest voices including local NYC personalities and musicians.

Space for ANIMAL WISDOM was sponsored in part by Sokoloff Arts.

*All ticket holders will receive a pre-release copy of the Animal Wisdom Soundtrack once it is recorded, included in ticket price. Soundtrack value is $25.

Blurring genres but grounded in blues and Methodist hymns, ANIMAL WISDOM is a lo-fi, idiosyncratic, concert-cabaret about talking to the dead, inspired by real conversations between Heather and her deceased relatives. A constellation of dead souls is conjured, from Doris, a flamboyant and cruel childhood piano teacher (10 years dead), to the elusive ex-CIA code-breaker godfather Myles (5 years dead). Like an improvised musical séance, the tone shifts slowly from playful to dangerous, circling around darker, more disturbed forces in her family and herself, until, we are catapulted into a new sphere of haunted-ness, culminating in a 28 minute Requiem Mass sung in darkness by a choir, invisible until now. Taken in parts from poorly remembered Methodist hymns from the 1800’s, hyperbolized family mythologies, gothic Catholic masses for the dead, Southern Native American folk tales passed down and bastardized in Louisiana and a fervent belief in ghosts, ANIMAL WISDOM is performed with an understanding that, whilst its audiences may or may not believe in the afterlife, music might help forge a connection with those they too have loved and lost.

HEATHER CHRISTIAN is the daughter of a blues musician and a go-go dancer and is an Obie Award winning composer/performer. She is a recent Sundance Fellow and Ars Nova Uncharted Member with new musical Annie Salem, alongside Rachel Chavkin. Recent composing/performing credits include her own multi-media concerts Animal Wisdom and North (LaMama NYC), the TEAM’s Mission Drift, (National Theater in London) Ripe Time’s The World is Round (BAM NYC), Of Mice and Men (West Yorkshire Playhouse), the entire summer ’16 season at Hudson Valley Shakespeare (Macbeth, As you Like It, Measure for Measure) as well as numerous compositions for plays with music and experimental soundscape operas for dance. Short film scores include Man Rots from Head, Eat, Pauline Alone, Woman in Deep, and Gregory Go Boom, which took a 2014 Sundance Grand Jury Prize. Her first score for a feature film, Lemon, premiered at Sundance Film Festival January of 2017. She is a long-time musical and performative collaborator in devised theater with the TEAM, Jane Comfort Company, Mark Dendy, Mac Wellman, Big Dance Theater, Taylor Mac, and Witness Relocation. She was recently named one of TimeOut NY’s Downtown Innovators To Watch and has been nominated for a Drama League Outstanding Performance Award. She has released 8 records and can be seen all over the world as Heather Christian & the Arbornauts in concert halls and dive bars avant-torching.
Town Stages (Robin Sokoloff, Executive Director) is New York’s premier venue to celebrate, collaborate, and put on a show. A new female-driven cultural arts institution in the heart of downtown Tribeca, Town Stages is a state-of-the-art, flexible performance and event space that supports the entire lifecycle of New York’s hallmark industries. With a stunning 10,000 square foot storefront facility, “TOWN” provides world-class cultural experiences and opportunities for all: from civic to corporate, tech to theater. Town Stages holds 299 guests, blending convention-level facilities with captivating decor throughout its Mainstage, Cocktail Bar & Lounge, Gallery, Salon, Greenrooms, and more. Town Stages offers much-needed space and production resources for businesses, arts organizations, and families celebrating their very important day. TOWN boasts ticketed performances and curated community programming in the performing arts, fine arts, and the advancement of social justice. Town Stages is available for fashion shows, film shoots, weddings, and beyond. Follow under @townstages and #itsyourtown. For more information, visit www.townstages.com.

Sokoloff Arts (501c3) is an emerging cultural institution providing inspired space, perspective, and opportunity for cutting edge events in all sectors of The Arts, Corporate, Civic, and Cultural life in New York City. Led by a team of women from diverse backgrounds and multi-hyphenate artistic disciplines, Sokoloff Arts works to provide viable and safe space to congregate, strives to promote cross-cultural community engagement, and blends the arts and business to create sustainable solutions to social and financial inequalities. The organization assists young creators with not only space, but resource generation, production, and community. To address the overwhelming demand for hi-tech, flexible, and affordable performance and event space in New York City, Sokoloff Arts has built Town Stages in Tribeca. To learn more, visit sokoloffarts.org.