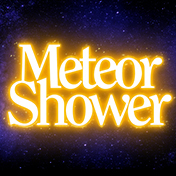 Meteor Shower is an “After Dark Comedy” by Steve Martin, directed by Jerry Saks and starring Amy Schumer.

It’s a hot night in Ojai, California, and Corky and her husband Norm are having another couple over for dinner. Laura and Gerald, though, aren’t looking for a casual evening of polite small talk with new friends. Eventually, the two couples find themselves in a marital free-fall matched in velocity and peril only by the smoldering space rocks tearing through the sky. Entertaining has never been more entertaining than in this “cosmic comedy from the master of the American absurd” (Variety).

It takes effort to make a marriage work — sometimes even self-help tapes, movies and therapy sessions.  Corky (Amy Schumer) and Norm (Jeremy Shamos) have been at it for years. Yet they are ill-equipped to handle the challenges of their visitors, Laura and Gerald, when they come to view a meteor shower at their home (a stunning black and white modern scenic design by Beowulf Boritt). In Meteor Shower, the new play by Steve Martin, Corky and Norm prepare for their guests not realizing that the pair has an ulterior motive in mind for their marriage — “total collapse.” Directed by Jerry Zaks, the play provides a lot of laughter, aided by the presence of two skilled standup comedians.  Martin includes several funny lines as well as physical humor (Laura does a sexy dance between scenes to show off and later Corky does the same one – with different results) and visual humor (the anonymous gift of three eggplants). Schumer gets appreciative applause from the audience but is slightly stiff as the earnest and naive Corky. She’s better at physical humor than at dialogue and is hysterical at times.  When Gerald comes onto her and makes pointed remarks about her anatomy, she grabs a pillow, …Read more