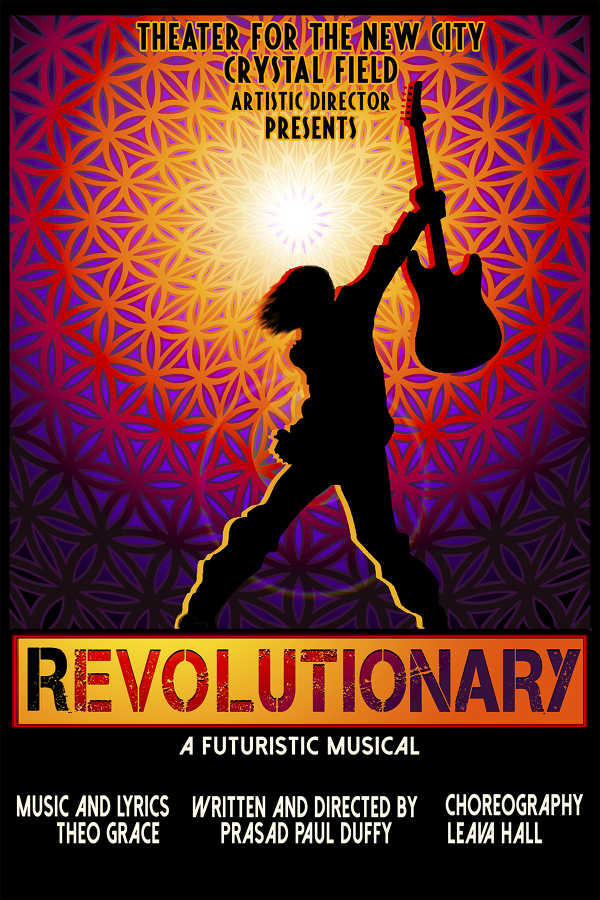 “REVOLUTIONARY” is a futuristic musical about young, homeless musicians who become entangled in a revolution against fascism. Written and directed by Prasad Paul Duffy, with music and lyrics by Theo Grace, it is set in and around a graffiti filled apocalyptic version of Washington Square Park. Theater for the New City’s tenth Dream Up Festival will present the piece’s New York premiere run September 9 to September 15.

The musical takes place in a near future where homelessness, drug abuse and prostitution are running rampant, the government requires citizens to have a computer chip planted in their arm, and those who don’t are subject to arrest by Robo Cops. Gabriel is a talented musician longing to live off the grid. After an encounter with a Robo Cop who tickets him for playing guitar without a chip, Gabriel meets a group of homeless people who have also been living without a chip. Wolf is a former police officer before the invention of the Robo Cops. Bethany is a meth-addicted sex worker under control of her abusive pimp. Jedi is a runaway who has the most proficient street skills out of everyone else. Maya is a drag queen psychic and mentor to Jedi. After Maya is taken to a FEMA camp for speaking out to a Robo Cop, Bethany brings the group to the Source Center, a sanctuary for the homeless preparing for the revolution.

While there, they become entangled in an underground revolution to help fight the encroaching fascism. As part of their indoctrination into the movement, they undergo a series of trainings and initiations that empower them to become spiritual rebels. They are guided by the charismatic leaders of The Source Center, who help the homeless youth, heal their addictions and activate them to Fifth Dimensional Consciousness through meditation, therapy and Ayahuasca ceremony. Their lives are forever changed and in their new found freedom, some of them enter into romantic relationships with people they never have thought they would. Together they all become the personification of the evolution of revolution, as they shift into a new paradigm here on Earth.