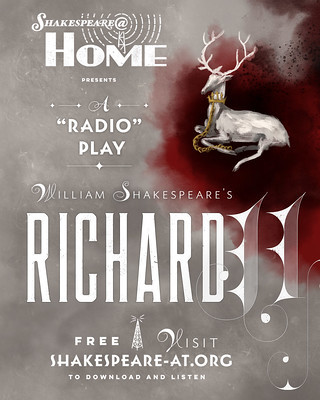 The acclaimed Shakespeare@, Jersey City’s premier classical theater company will present a new, all-free ‘radio play’ season of Shakespeare as a response to the COVID-19 epidemic. This new audio-play series entitled Shakespeare@ Home. Reminiscent of the radio plays of the 1930’s and 40’s the series begins with Richard II, which launches July 1st 2020. Presented with original music and sound design, the radio plays are adapted and directed by Sean Hagerty. Mr. Hagerty has partnered with Emmy-winning Sonic Designs to capture the lost art and thrill of radio drama, all without leaving the confines of quarantine. Shakespeare@Home will continue the company’s acclaimed tradition of delivering accessible interpretations of classic works for a new audience with a focus on international and cross-cultural exchange. There will be no cost to download and listen on-line at

Presented in three weekly episodes, Richard II tells the timely story of the misrule and downfall of a mercurial King, leading to his overthrow by the opposing forces of the banished Henry Bolingbroke who ascends the throne to become Henry IV. This history play by William Shakespeare, which is believed to have been written in approximately 1595, is based on the reign of King Richard II from 1377-1399.

Richard II features original music composed by Joan Melton with sound design by Dan Gerhard and Ellen Fitton of Sonic Designs. Justin Goldner is the music producer and supervisor and casting is by Robin Carus. Sydney Steele is the Associate Producer.