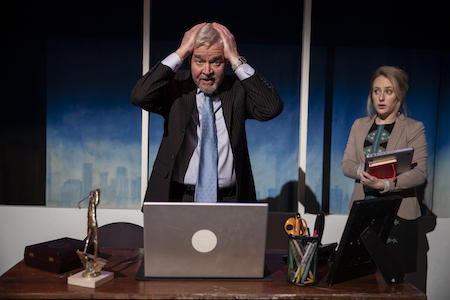 THEATER FOR THE NEW CITY presents SHAREHOLDER VALUE, a new play by Tom Attea where stocks plummet and tensions soar. This play, which reunites the playwright with director Mark Marcante and composer Arthur Abrams, the team behind Heather Smiley for President, America’s Favorite Newscaster, and An American Worker is based loosely on the meltdown at General Electric. It centers around the struggles the CEO of a troubled conglomerate faces to deliver what he must every quarter, regardless of the problems the company runs into. The production will play a limited engagement from Thursday, March 21st through Sunday, April 14th at Theater For the New City (155 1st Avenue at East 10th Street).

Like all CEO’s of publicly held conglomerates, Dennis Holland of the fictional company Total Electric must deliver one thing: SHAREHOLDER VALUE. From the financial crisis of 2008 through the present, Holland scrambles to implement short-sighted ways to deliver quarterly profits, including spinning off divisions and green lighting cutbacks, consistently favoring quick fixes over long-term strategy. An activist investor challenges his leadership, and when the CEO decides to sell the light-bulb division, TE’s founder, Thomas Edison, haunts his dreams. When the stock continues to tumble and debt mounts, the cost of his actions becomes increasingly apparent to his shareholders, his employees, and finally to himself. Tickets, priced $10-$15, may be purchased online through SmartTix , by calling (212) 868-4444 or the the box office at (212) 254-1109.