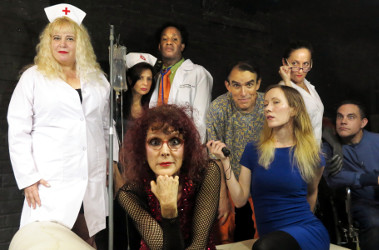 Sometimes a trip to the Emergency Room is so awful that it’s just made for Theater of the Ridiculous. That’s the premise of “Singin’ in the E.R.,” the newest musical by Ruby Lynn Reyner, a star of John Vaccarro’s Playhouse of the Ridiculous who has been called a female Jerry Lewis. The piece is inspired by ordeals in a New York City hospital suffered by the author and her husband. Now she believes that the only way to deal with such life-changing experiences is through unrestrained, exorbitant laughter. The play was written from actual experiences, but they are transformed with outrageous satire. The setting is a fictional hospital in the dark world of medical mishaps. A variety of songs, all in rock ‘n roll style, are nestled among outrageous scenes with such mind-bending events as arms falling off, crashes with the crash cart and fitting a woman’s ass to a sling. One of the songs, “Biggest Balls in Town,” was written by Reyner and the late Jackie Curtiss; the others are by Reyner alone.