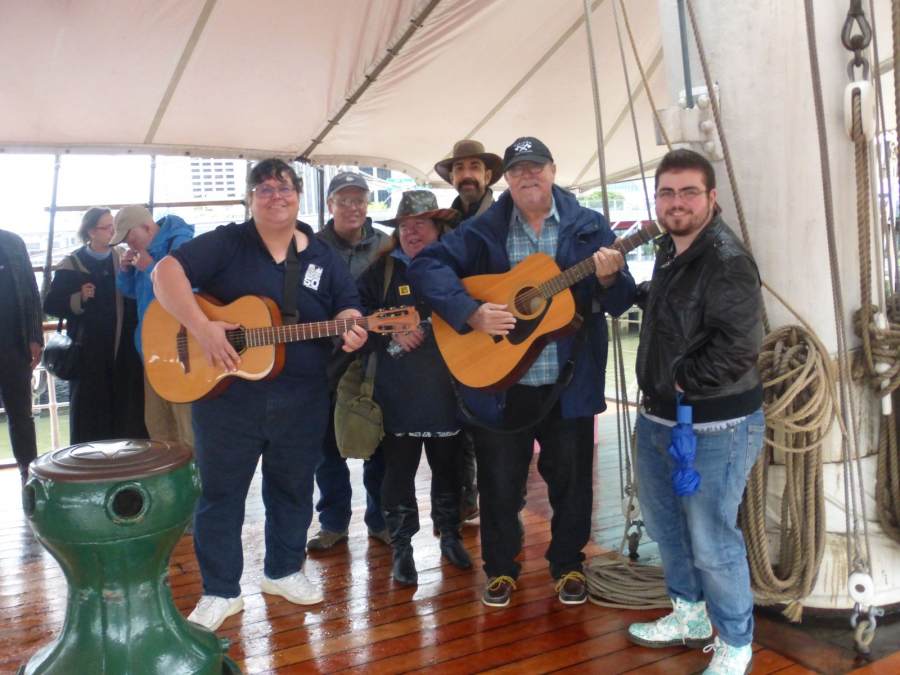 South Street Seaport Museum’s monthly sea-music event Sea Chanteys and Maritime Music – the original NYC chantey sing, now made popular on TikTok – continues virtually on Sunday, March 7, 2021 at 2pm ET. From our living rooms and kitchens, join a round-robin of shared songs featuring members of The New York Packet and friends. Listen in, lead a song, and belt out the choruses for your neighbors to hear on the first Sunday of every month. The event is FREE. Sign up here to receive the Zoom link 24 hours prior: bit.ly/ChanteyMar7.

After years of meeting in person on the historic tall ship Wavertree, the event moved online in April 2020. Now in its second year of virtual incarnation, South Street Seaport Museum’s Virtual Chantey Sing has evolved into the preeminent virtual chantey sing in the world, featuring professionals and amateurs, old salts and new initiates, from across the street, across the country, and across the pond. South Street Seaport Museum actively recruits and supports new and diverse singers for each sing.

“A fine mix of familiar songs and some new ones that should be better known. The fact that performers came from all over, from the Netherlands, the UK, Canada, and across the US, gave a wonderful feeling of this special musical community we all share,” wrote one participant.

“This venue draws some excellent, knowledgeable singers and I always learn. Today I came away with four songs I wanted to learn,” wrote another participant. “Joy!”

Old-time sailors on long voyages spent months living together in close quarters with no outside entertainment, no new people to interact with, a monotonous diet, and each day pretty much just like the day before. How did they keep their spirits up? Singing together! Work songs and fun songs, story songs and nonsense songs, songs of nostalgia and songs of up-to-the-moment news – all were part of the repertoire onboard. At South Street Seaport Museum, the Chantey tradition lives on. The March event will be hosted by Deirdre Murtha of The Johnson Girls with The New York Packet, a collection of traditional chantey singers in the New York area.

“Sea chanteys fit in beautifully with the New York tradition,” said Laura Norwitz, SSSM’s Senior Director of Program and Education. “Sailing ships were a melting pot of languages and cultures, and chanteys and forecastle songs, along with hard work and shared challenges, helped sailors merge into one community. When we sing these songs today – some old, and some updated with up-to-the-moment lyrics – we celebrate our connection with our maritime heritage and also with the community we create enjoying home-made music together.”

Each online singalong includes a virtual look at some objects from the Museum’s collection related to the songs being sung.  Many singalongs also include a virtual visit to one of the Museum’s ships and a chat with a member of the crew. The next virtual Chantey Sings will take place on Sunday, April 4, 2021 at 2pm ET, hosted by Bonnie Milner – RSVP at bit.ly/ChanteyApr4.

The New York Packet was established over 30 years ago as the official maritime singing group of South Street Seaport Museum. First singing on the iconic vessel Peking, they have endeavored ever since to keep chantey singing alive in lower Manhattan. Even when the Seaport encountered “heavy weather” during and after hurricane Sandy, the Packet found places to fill with sound while awaiting a return to their beloved ships at the Seaport. In May of 2019, the moment came when the Packet could return and sing aboard Wavertree. It was a magical and welcome moment.