POST A SHOW
String Quartet ETHEL Captures the Circus at BAM 11/14-17
Classical/Opera, Off-Off, Other, Other Music 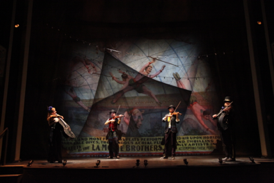 A musical journey capturing the magic and history of the circus through stunning images, film, and the words of performers past and present

Bloomberg Philanthropies is the Season Sponsor

As part of the string quartet’s 20th anniversary season, ETHEL returns to BAM with Circus: Wandering City, a multimedia musical journey into the history of the iconic Ringling Bros. and Barnum & Bailey Circus that explores and honors the complex relationship between circus troupes, their performers, and the audiences they inspired.

Combining original music composed by the quartet with projected images, films, and interviews mined from the John and Mable Ringling Museum of Art, ETHEL puts on a multimedia stage work that is both big-hearted and clear-eyed about the scintillating and debilitating sides of the circus industry and its denizens. Wandering City made its world premiere in January 2018—the 250th anniversary of the modern circus. According to the Sarasota Observer, it was “one of the most innovative, informative and entertaining evenings…a fast moving and tightly structured evening by a group of projection, scenic, costume, lighting and sound designers who are as talented and skilled as the circus performers they honored.”