POST A SHOW
That’s Not Tango-Astor Piazzolla, A Life in Music
Off-Off, Other Music 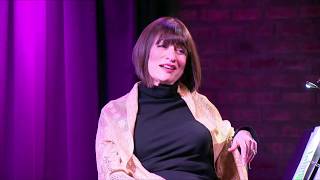 The life and music of the legendary Astor Piazzolla—the father of Nuevo Tango—is at the heart of the acclaimed show “That’s Not Tango – Astor Piazzolla, A Life In Music” returning to New York’s Sub Culture on June 8, 9 & 10, as well as multiple shows in July. The director and co-writer is Stephen Wadsworth, named one of the most influential stage directors of the 21st century by American Theatre.

The New York Times singled out the staged production when it premiered in 2016 during a limited run for its unique gender-bending premise – the part of Piazzolla is played by a woman, Lesley Karsten. Conceived by Lesley Karsten and written by Karsten and Wadsworth, the team have re-adapted their 2016 tribute to plumb more intimate details of the musician’s life, examining his doubts, struggles and regrets, and how they inspired and sometimes contradicted his celebrated career.

As Piazzolla, Lesley Karsten delivers a compelling dramatic narrative that offers a deeper understanding of Piazzolla’s life, from his rough childhood in New York to the fame he achieved for revolutionizing the traditional tango. The show unfolds through an interplay between storytelling and virtuoso performances of Piazzolla’s music by award-winning musicians P Jofre, (composer-bandoneonist), Brandt Fredriksen (piano) and Nick Danielson (violin).

“Lesley’s work as Piazzolla moves quickly beyond gender into the androgyny of the soul,” says Wadsworth. “A woman in a persona so conventionally masculine, and whose music has a bald assertiveness and violence many associate with maleness, is very tango. Piazzolla was fascinated by the quick-change animus-anima exchanges between men and women dancing tango.”

Karsten and Wadsworth take us on an intimate journey into Piazzolla’s past, from his childhood in New York, years that shaped the man he would become, to his death at 71 in Buenos Aires. Growing up on the Lower East Side, he was strongly influenced by the music he was surrounded by. Along with exposure to Bach, Stravinsky and Bartok, he heard klezmer from Jewish weddings, jazz from nearby clubs and tango¬—an idiom he initially rejected—from the scratchy records his father played.

A chance encounter with Artur Rubenstein when Piazzolla was 16 further inspired him to pursue music; he was soon taken under the wings of classical composer Alberto Ginastera and tango great Aníbal Troilo, and later went on to study with the legendary Nadia Boulanger. Through her, the composer found his true calling.

From this gumbo of life experiences emerged a music that’s intensely personal, yet universal and as beloved in Tokyo, Berlin and New York as it is In Buenos Aires. Since his death in 1992, Piazzolla’s reputation has only grown with jazz giants like Gary Burton and Al di Meola and
classical superstars like Yo Yo Ma, Emmanuel Ax and Daniel Barenboim including his works in their repertoires. His influence continues to be felt in the works of other significant composers, such as Osvaldo Golijov. As tango reaches new heights in popularity, Astor Piazzolla is taking his rightful place as a towering figure in all 20th-century music.

Fragments
ARTAUD MARAT
Object Collection’s You Are Under Our Space ...
Muffins In The Window: The Longest running Variety...