POST A SHOW
The Man Who Shot Liberty Valance
Off-Bway 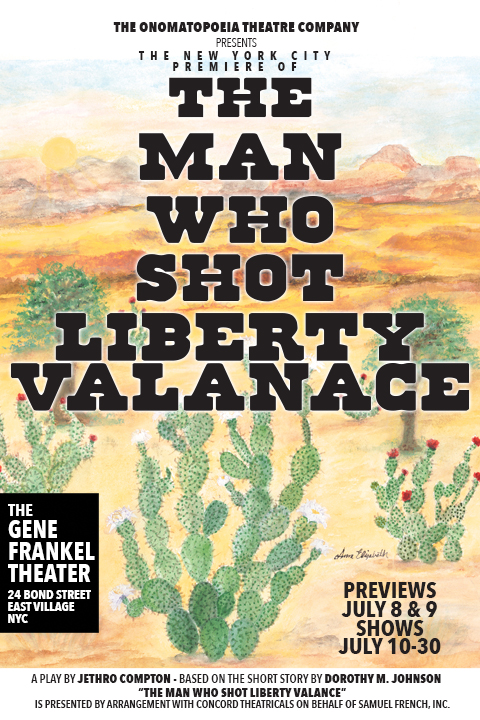 Most people do not think of a theatrical production when they think of a “Western”, they think of film. Movies such as “The Searchers”, “The Good, The Bad and The Ugly”, or even “Blazing Saddles”. For many the “Western” is a genre best known through the numerous films created in the golden age of Hollywood.

This is part of what makes Jethro Compton’s stage adaptation of “The Man Who Shot Liberty Valance” so wonderful. The story of “The Man Who Shot Liberty Valance” is probably best known from the 1962 film by John Ford, starring John Wayne, James Stewart, Lee Marvin and Vera Miles. The film is considered a timeless classic, but, like many films, it does not entirely follow the original story by Dorothy M. Johnson. Playwright Jethro Compton has smartly based his theatrical production on her original story, allowing him to put a fresh coat of paint on this classic fable, dealing with timeless issues such as racism, guns, and violence in America. This enables the theatrical production to truly become something special: a live action “Western” that honors the classic film, speaks to modern issues and touches upon universal themes, such as love and forgiveness.

When Ransome Foster, a scholar from New York City, first came to the town of Twotrees he arrived bloody and beaten. Yet after a quick recovery and a promise to a young woman to help her learn to read, Foster begins to change the small town he starts to call home with love & education.

This catches the attention of Liberty Valance, an outlaw who seeks to restore his view of” the norms of society” through terror & bloodshed. Suddenly, Foster finds himself on a collision course with the experienced gunman forcing him to make a choice: to run or to stand up for what he believes in, to live or to fight for what is right…

Please join Onomatopoeia for this classic tale of good versus evil, of law & order versus intimidation & violence, of one man versus Liberty Valance.

Macbitches by Sophie McIntosh
Immense Joy
MESHELLE at THE PUBLIC THEATER: Can I Be Great? Li...
A SYMPHONY FOR PORTLAND