POST A SHOW
The Pink Hulk: One Woman’s Journey to Find the Superhero Within
Off-Off 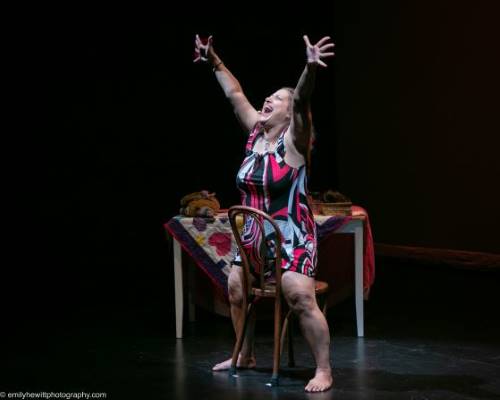 General Admission Tickets are $20; Students and Seniors are $15; Special Interest Groups are $10.

In honor of Women’s History Month, the WHAM Festival co-presents the critically, internationally acclaimed comedic solo show The Pink Hulk: One Woman’s Journey to Find the Superhero Within, written, performed and produced by three-time cancer survivor Valerie David. One performance with a talkback following will be staged at the Goddard Riverside Bernie Wohl Center, 647 Columbus Avenue (bet. 91st and 92nd Streets) in New York City, on Saturday, March 21st, 2020 at 7:30 p.m. The Pink Hulk has been invited back to WHAM for a third year in a row, performing a surprise new ending each time!

Now battling breast cancer after fighting off lymphoma, Valerie does something most people facing cancer in their life probably wouldn’t think of doing. With a fear that she might lose “the girls”, she takes them out for one last hurrah. And does Valerie succeed? Is there a “happy” ending? Come see the show to find out! This sexy, adventurous solo show follows Valerie’s journey to seek her own “hulk-like” strength to find her superhero within to become a 3-time cancer survivor. An empowering and true story of inspiration for anyone facing ANY adversity in their own lives! With plenty of humor—guaranteed!

Valerie “hulked out” on cancer; after her first two bouts with cancer—Non-Hodgkin’s Lymphoma in 1999 and then breast cancer in 2014/2015. Then in September 2018, Valerie was re-diagnosed with breast cancer—this time Stage IV metastatic. As of April 2019, she has beaten cancer again and has continued to beat it!

Valerie reactivated her superhero within, and exactly five months after receiving oral medication–no surgery, no radiation, no chemotherapy, Valerie no longer has active disease. There is no trace of her cancer! Her solo play is a celebration of being comfortable in one’s own skin, of embracing and accepting one’s own body—no matter the shape or size. Her comical take is funny, emotional and inspiring. The Pink Hulk is a true testament to the power of our own inner superheroes within to fight back any adversity in life—to never give up and always have hope!

“My show is not just about fighting cancer; it has a universal message of hope and empowerment,” Valerie said. And after all, a cancer diagnosis means only one thing: Time to get laid! The Pink Hulk has been accepted into 28 play festivals in 3½ years’ time, performing worldwide including in England, Sweden and Finland, garnering rave reviews and winning several awards.

light and desire
(THE MAKING OF) HOW TO SAVE THE WORLD IN 90 MINUTE...
DISCUS
Fabulation, or The Re-Education of Undine