POST A SHOW
Theater Resources Unlimited Writer-Producer Virtual Speed Date: The Art of the Pitch
Other 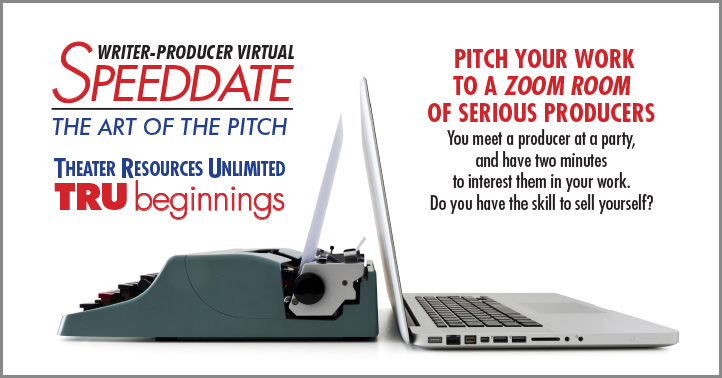 Theater Resources Unlimited (TRU) presents a Writer-Producer Virtual Speed Date: The Art of the Pitch, on Sunday, April 25, 2021. The popular event is now reformatted for Zoom, with more tech and less noise: each writer will be in an individual breakout room with each of the eleven producers. The submission deadline is Thursday, April 15, 2021. To apply, fill out the application here and email to TRUStaff1@gmail.com. The application fee is $65 for TRU members and $75 for non-members or observers. When naming the application document, please include your full name first.

“Due to the COVID-19 pandemic, we were forced to rethink all TRU programs for Zoom presentation. Turns out that what seemed at first to be a drastic inconvenience has paid off with surprising benefits,” said Bob Ost, executive director of TRU. “We now have extended our reach well beyond the New York area, throughout the US and as far away as England, Australia, Singapore and Malaysia. Now writers from all over the world can come meet and pitch to a lineup of New York producers.”

You meet a producer at a party and have two minutes to interest them in your work. Do you have the skill to sell yourself? Here’s a chance to practice your pitching with real producers who are open to and interested in meeting you. Okay, they probably won’t option you on the spot, but they’ll give you valuable feedback about your work and your ability to talk about it. And you’ll have the opportunity to start developing a relationship. And that’s what this business is all about. Relationships.

The Speed Date is the only event I know of that gives writers the chance to meet high level producers one-on-one in a room. To me, that’s what makes the Speed Dates so valuable. And you do it with kindness, which I value in life. ~Vincent Amelio (How Alfo Learned to Love)

We’ll have eleven producers lined up, from both the commercial and not-for-profit worlds, all with an interest in new projects; we also may have eleven aspiring producers from our Producer Development program. So you’ll be pitching to as many as 22 producers in total! Come with a willingness to learn, because the real value is the chance to practice your pitching. And you’ll be getting invaluable coaching from experts, as well.