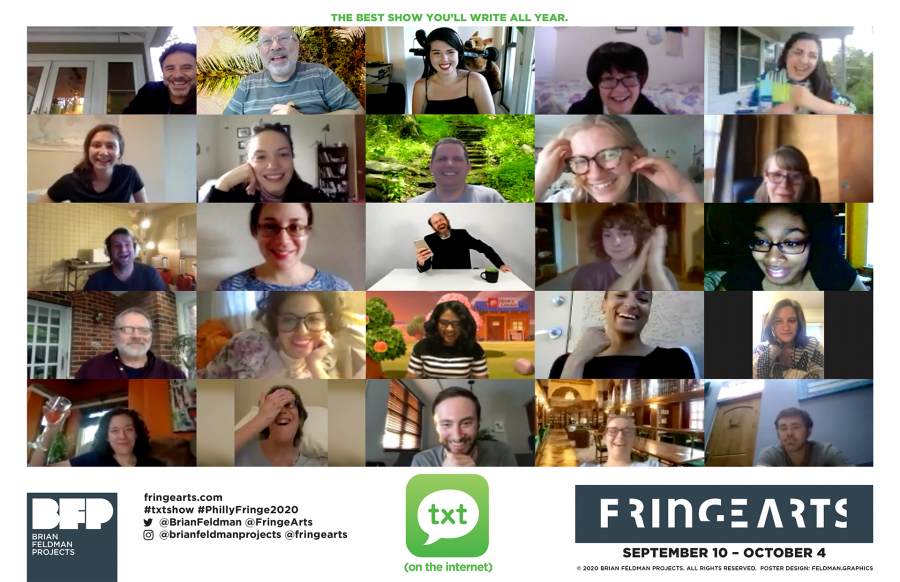 In the midst of a 12-city, 4-country, 64-show international virtual tour* (during a global pandemic), award-winning performance artist Brian Feldman brings the online version of one of his signature projects to the 2020 Philadelphia Fringe Festival, as one of 120 shows available to audiences virtually and IRL as part of this year’s festival.

The best show you’ll write all year, #txtshow (on the internet) is a completely immersive multiscreen performance featuring a mysterious character named txt (pronounced “text”) who recites a script written anonymously in real-time by a live audience (on the internet).

Created and performed by Brian Feldman (24 Minute Embrace, Dishwasher, Wawa® Shabbawa), this live, interactive performance takes place on Zoom. (The 100th show on September 10th will make it the first of Brian Feldman Projects to reach that performance milestone.)

Please Note: This show contains audience interaction. The content of the show is based entirely upon what audience members write in anonymity. Recommended for 18+. This event may contain mature themes, profane language, and explicit sexual content.

#txtshow (irl) had its world premiere at the Kerouac House in Orlando, Florida on Feb 26, 2009.

ABOUT PHILADELPHIA FRINGE FESTIVAL:
The Philadelphia Fringe Festival is a 4-week long, city-wide celebration of innovation and creativity in contemporary performance. Each September, the Festival explodes into every nook and cranny of Philadelphia with more than 1,000 artistically daring performances, including national and international performances curated by FringeArts, and works that are produced by independent artists and promoted by FringeArts. This year’s festival will be predominantly virtual, featuring over 120 works across genres and platforms. A handful of events will take place outdoors, and follow all city and state guidelines around social distancing and public health measures. fringearts.com

ABOUT BRIAN FELDMAN PROJECTS:
Brian Feldman is an award-winning performance artist and actor. He lives in Washington, Douglass Commonwealth where, as DCist noted, “In a city that has an advocacy group exploring how to “make D.C. weird” – and is still struggling – Brian Feldman is a shining beacon of eccentricity.” Brian’s work has been favorably compared to Marina Abramović, David Blaine, John Cage, Christo, Marcel Duchamp, Tehching Hsieh, and Andy Kaufman, and featured on television, radio, in print, and online. Since August 2003, he has presented 300+ performances of 125+ projects at 175+ venues and festivals in cities worldwide through Brian Feldman Projects, one of North America’s premier presenters of experimental time-based art. brianfeldman.com