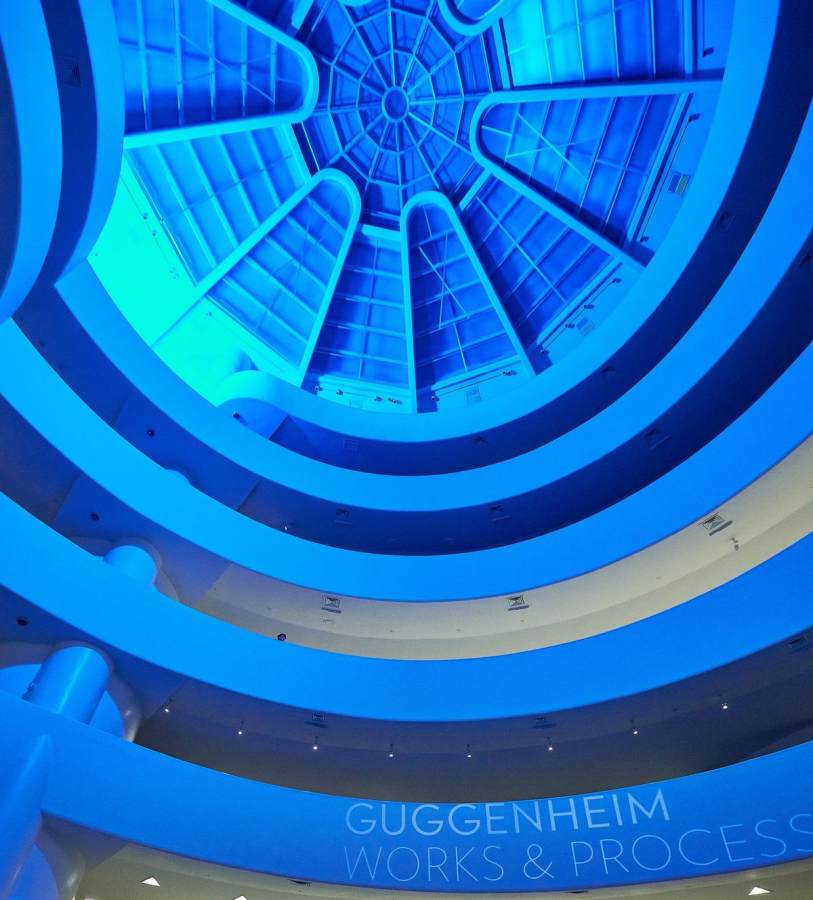 The performing arts series Works & Process announces the return of live performance at the Solomon R. Guggenheim Museum as a part of New York state’s “Safely Bringing Back the Arts” pilot program. Beginning on March 19, under the guidance of the Department of Health, two concurrent series of performances produced by Works & Process will take place in the Guggenheim’s iconic Frank Lloyd Wright-designed rotunda. These reduced-capacity events will be among the first indoor performances the state has permitted since it closed venues due to the pandemic a year ago, reaching a milestone in the recovery of the city’s cultural sector. The Spring Season includes participation in Lincoln Center’s Restart Stages, NY PopsUp, and the Culmination of WPA Virtual Commissions.

The first day of spring, March 20, marks the beginning of 12 one-night-only Works & Process commissions developed in its bubble residencies. This series premieres with Rhapsody in Blue by Caleb Teicher and Conrad Tao, artists long supported by Works & Process. Tickets go on sale 72 hours prior to each capacity-reduced performance; more information is available here: https://www.guggenheim.org/initiatives/works-process.

This group of new commissions by New York-based artists amplify underrepresented voices and performing arts cultures. They have been incubated inside two-week-long Works & Process bubble residencies in upstate New York, making it possible for artists to safely create and rehearse together. On the last day of each residency, the artists will travel together to the museum and present a thirty-minute live performance in the rotunda.

Several of these Works & Process pieces will be presented in matinee performances at Restart Stages, a cultural and civic initiative to jump start the performing arts sector in New York City; part of the SNF-Lincoln Center Agora Initiative, a collaboration that reimagines and reactivates public space for a new era. More information is available here. Select Works & Process projects will also be featured as part of NY PopsUp, an expansive festival featuring hundreds of pop-up performances throughout New York City.

Between March 19 and April 19, Works & Process will present a succession of surprise daytime performances at the Guggenheim. These unannounced events will offer visitors a joyful, live, and safe experience. Performers from organizations such as Jazz at Lincoln Center, the Metropolitan Opera Lindemann Young Artist Development Program, The Santa Fe Opera, Glimmerglass Festival, the Paul Taylor American Modern Dance and more have been invited to participate. Select artists featured as part of Works & Process Artists (WPA) Virtual Commissions will also perform.

With the return of live events, the Works & Process Artists (WPA) Virtual Commissions series will conclude. This initiative was launched in March 2020 and has provided $150,000 in financial support to artists during the most uncertain of times. A total of 85 WPA Virtual Commissions will have premiered, providing a platform and compensation for over three hundred artists.

About Works & Process Bubble Performances
Evening performances will take place at 8 pm at the Solomon R. Guggenheim Museum. Select projects will be featured in matinee performances at Restart Stages, made possible by Jody and John Arnhold, Arnhold Dance Innovation Fund and First Republic Bank. Restart Stages at Lincoln Center is made possible by Stavros Niarchos Foundation-Lincoln Center Agora Initiative. Major support provided by First Republic Bank. Works & Process daytime performances will be presented under the umbrella of the NY PopsUp Festival on March 20, 30, and 31. NY PopsUp is committed to the safe re-opening of New York venues with the protocols that have been established by the New York State Department of Health (DOH).