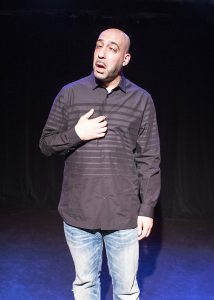 The Bullpen, written and performed by Joe Assadourian and directed by Richard Hoehler, is an endearing and hilarious one-man show full of heart and humility. The play, which recently opened at the Playroom Theater, is produced by Eric Krebs in association with The Fortune Society -- a nonprofit organization which helps those who’ve been incarcerated to regain their footing in society after their release.

In The Bullpen, the protagonist’s life is turned upside down after he is arrested for assault with a deadly weapon in a NYC club. Once “on the inside,” Joe inhabits a cast of bullpen characters that range from street-wise African-American hustlers to cross-eyed white stoners to his inarticulate public defender. It should be noted that one of the highlights of this show is Mr. Assadourian’s ability to switch between each of the diverse and idiosyncratic characters with such speed and ease.

Unsure of Joe’s guilt or innocence, the other inmates in the bullpen decide to hold a mock trial for Joe. This is the only place where Mr. Assadourian’s character study becomes muddled by the sheer number of characters in this piece – a whopping 18! The transition between the character is so quick and their lines of dialogue so short that, you often miss out on who’s saying what. The good news is that Mr. Assadourian doesn’t leave you hanging too long as the clarity of his writing and Mr. Hoehler’s direction leads you back on-point.

Of course, the mock trial goes much more smoothly (and fairly) than his real trial. It is at this point in the piece where we see Joe finally take the reins of his case, defending himself in court and standing his ground when things seem to be going against him.

The flow of The Bullpen is, for the most part, steady. However, there are moments when a few of the characters break into song and various points in the piece, accompanied by the real instrumental tracks. These moments seem completely off-kilter with the rest of the piece. They took me completely out of the through-line of the piece and seemed to only add an unnecessary humorous element to an already spot-on play.

All-in-all, The Bullpen is what every one-man show strives to be. It is a testament to what a talented writer/performer-director team can accomplish with clarity of vision and purpose.

Now at the The Playroom Theater.