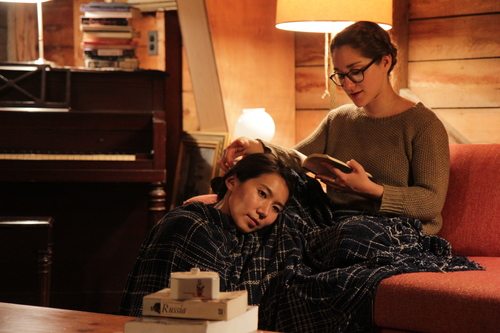 With the glow of a flashlight and a stage set to look like a cabin alternate for Sam Raimi’s horror classic The Evil Dead, Tiny Little Band’s newest production, Ghost Stories, is a sensory journey directed by Stefanie Abel Horowitz that touches on elements of love, loss, and perception -- while also doing its best to freak you out a bit.

Cloud City, where we lay our scene, is an intimate theater art space in Williamsburg, Brooklyn. With scenic design by Carolyn Mraz and lighting by Daisy Long, this melancholic piece from TLB transforms the close quarters of the space into a lived-in living room complete with a scratchy record player, which casts out faint wafts of music while patrons take their seats among an assortment of Salvation Army chairs and sofas. The three primary cast members, Dan Kublick, Emma Meltzer, and Jiehae Park, each take their turn with the creepy narrative that serves as the backbone for the piece; the lanky Kublick, in particular, uses the words of playwright Jerry Lieblich and his own baritone biddings to ease us into a world where the things that you think are real are not, and things that aren’t real can materialize. Yet a fourth, uncredited character -- darkness -- arguably makes the biggest impression of all. 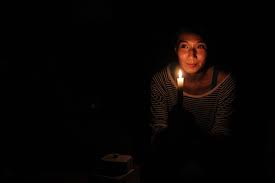 Warning: The room is plunged into complete darkness many times, forcing the audience to exist in shared sensory deprivation, and to great effect. The silence rings in your ears and your eyes search for light but find none. Even though you know you are in a room full of people, you feel critically alone and vulnerable -- a scary story’s bread and butter. And even if the words you’re hearing aren’t the most comforting, they are all you have in the void and you feel yourself cling to them. The experience removes not only the fourth wall, but the first, second, and third as well.

That's not to say this play is scary. It’s unsettling, the way any completely dark and silent room full of people would be, but the tenor of the play is ultimately one of nostalgia, as the actors take turns reflecting on what they have lost or, even worse, what may have never existed at all.