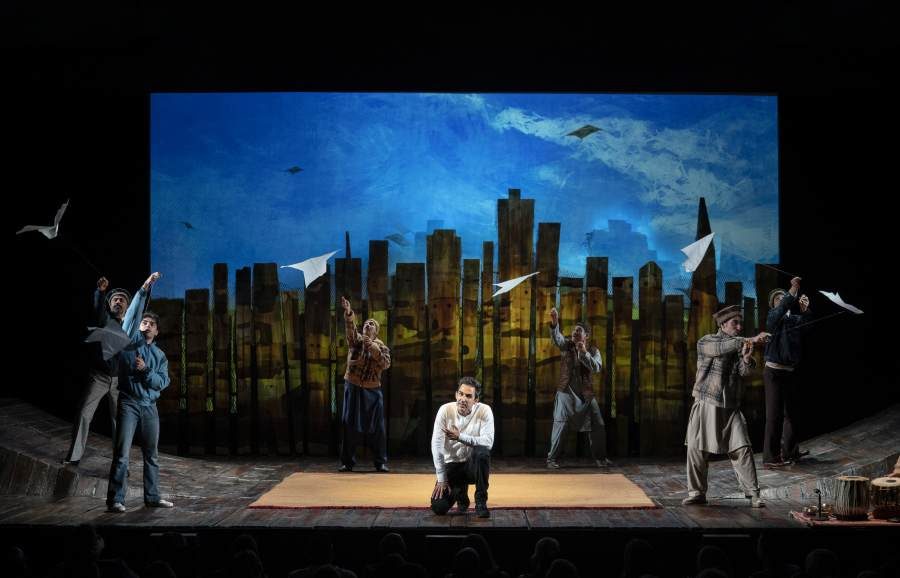 Adapting a beloved bestselling book into a Broadway show is not without its challenges. While the show has name recognition and is sure to attract loyal readers, it also creates expectations-sometimes unreasonable.

The novel, The Kite Runner by Khaled Hosseini published in 2003, covers tumultuous times in Afghanistan's recent history, from the fall of the monarchy, the Soviet invasion, the exodus of refugees to Pakistan and the United States, and the rise of the Taliban regime.

But at its heart, it is the story of a father and the son who so desperately wants his love and approval. When young Amir, the main character, fails to intercede in an attack on his friend and servant Hassan, it puts a series of events in play, leading to a lifetime of guilt and recrimination for Amir.

Over 7 million copies of the book were sold in the US and made its rounds in book clubs. That would suggest a great Broadway ticket potential. So the new show The Kite Runner at The Hayes Theater was in a good position to be a hit. Yet the show is less than satisfying.

The popular maxim in writing is “Show, Don’t Tell” and that’s one way in which the show and playwright Matthew Spangler go astray. Spangler attempts to tell too much and often has Amir narrating the events, detailing history quickly and almost dispassionately. Yet specific events when dramatized, often add little substance or understanding for the audience. Amir and Baba, his father, are forced to flee Afghanistan when the monarchy is overthrown and the Russians invade. Years later in America, Baba becomes ill. After learning the doctor’s family is from Russia, Baba refuses to see him. How does that event advance our understanding of Amir and his relationships?

There’s also a lot of unnecessary dialogue as Amir tells us what we already know and have seen. He harbors guilt and a soul-crushing secret, so when his fiancee reveals something about her past, he begins to tell her-but stops. Then he turns to the audience, telling us that he didn't tell her but tells us everything he would have told her- things we already witnessed.

Because of flaws in the script, we don’t connect with the characters. I felt little sympathy for Amir. Director Giles Croft also allows his actors to over-emote. Baba (Faran Tahir as Baba) is brusque and bombastic, emphasizing words. Hassan, Amir's friend, played by Eric Sirakian, punctuates his speech, often speaking too loudly.

Since it’s Amir’s story and his flashback, Arison portrays Amir as a boy as well as an adult when he gets to America. Sirakian, slighter and smaller than Arison, appears younger, so when the two wrestle and play as friends, it’s actually a bit uncomfortable watching a grown man ‘playing’ with a young boy. The show might have been better served had a younger actor played Amir as a child while the narrator watched from the side. The poignant moments, dad’s final hug, Hassan’s son in the hospital with Amir praying, should have been moving but lacked drama.

One of the highlights was the presence of Salar Nader playing the tabla, the twin hand drums used in Hindustani classical music. Sitting onstage, he performed for almost the entire show.

I know that I enjoyed the book, yet I found myself indifferent to Amir’s endless narration and some poor choices of dramatic elements in the play. Quite frankly, I found the play boring, yet most in the audience stood and cheered for the performers at the end. So maybe I was in the minority.

Some books need to stay on the pages so we readers could bring them to life through our own imaginations. For me, The Kite Runner is one of them.