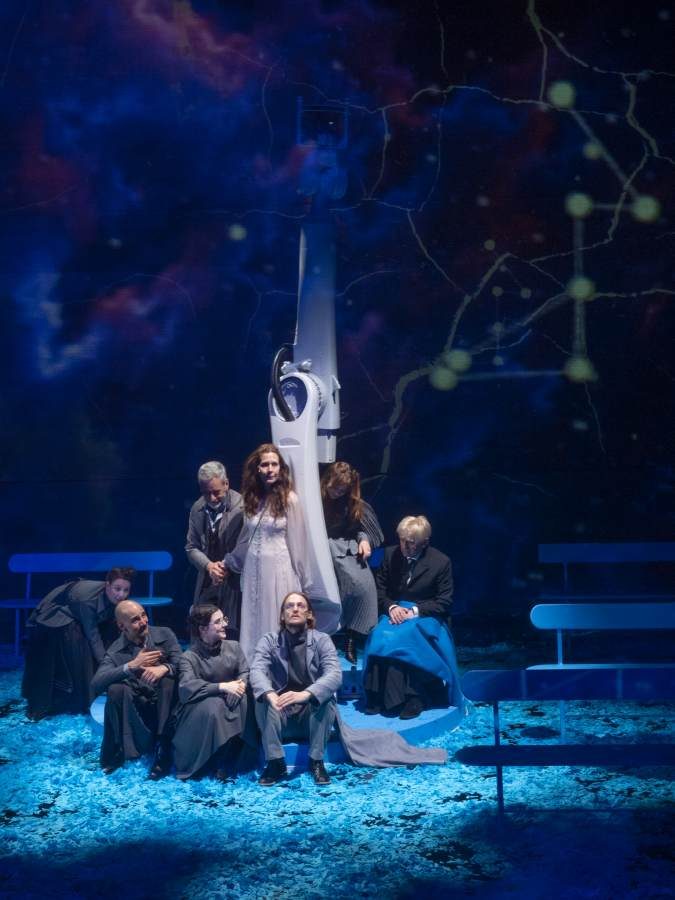 Classics remain classics because they speak to us-no matter when they were written or where they are set. In a newly-imagined version of Chekhov's “The Cherry Orchard,” a family remains stuck in the past. Soon their beloved home and cherry orchard will be put up for auction and sold to pay for back taxes.

“The Orchard” playing at the Baryshnikov Art Center features Mikhail Baryshnikov and Jessica Hecht. Hecht plays Madame Ranevskaya, the owner of the house, an ethereal languid creature, often lying about. She returns to her childhood home where she and her parents were born to be with her brother as they try to save their home. They recall their childhood and bemoan the inevitable fate of their home. Although there is a solution for keeping the land, it involves razing the home and destroying the orchard to build summer rentals. The pair would rather leave the home, than be part of its destruction.

The story is about the end of their world as they knew it and includes the presence of a faithful elderly servant Firs (portrayed by Mikhail Baryshnikov.) Although Firs was freed from slavery several years before, he remained with the family. Ironically and sadly, at the end when the family finally leaves (in what felt like a dragged out departure) they have forgotten him.

Juxtaposed with memories of the past is a futuristic huge robotic arm in the center of the stage, almost reminiscent of what one might see in a planetarium. In fact, at one point it does project images of the planets on the scrim curtain at the front of the stage. The arm is constantly projecting images, often of the actors onstage, so we see the performers in front of us and at the same time projections of them. Other times the dialogue appears on the scrim, sometimes translating the ASL of one of the characters. At one point, this was humorous as the young student was signing something, the girl infatuated with him was translating, totally incorrectly.

“The Orchard” works better if the viewer is already familiar with the story. Otherwise the extra creative touches are obstacles for comprehension. Later the student signs vigorously and passionately but we are offered no translation. Immediately afterwards, another character delivers his own monologue in French. Finally, the characters huddle nervously around the arm when a man in military gear approaches them menacingly and harangues them in Russian. Does this suggest that there are barriers between us? It is never explained and the languages are never translated.

Directed and interpreted by Igor Golyak, the show is a hybrid, providing one type of experience to the in-person audience and another one virtually for an at-home audience. Initially I considered watching the show a second time at home, to experience it virtually. However, despite the technology which included a ‘well-behaved’ robot dog, I wasn’t captivated by "The Orchard." Certainly not enough to sit through it a second time.