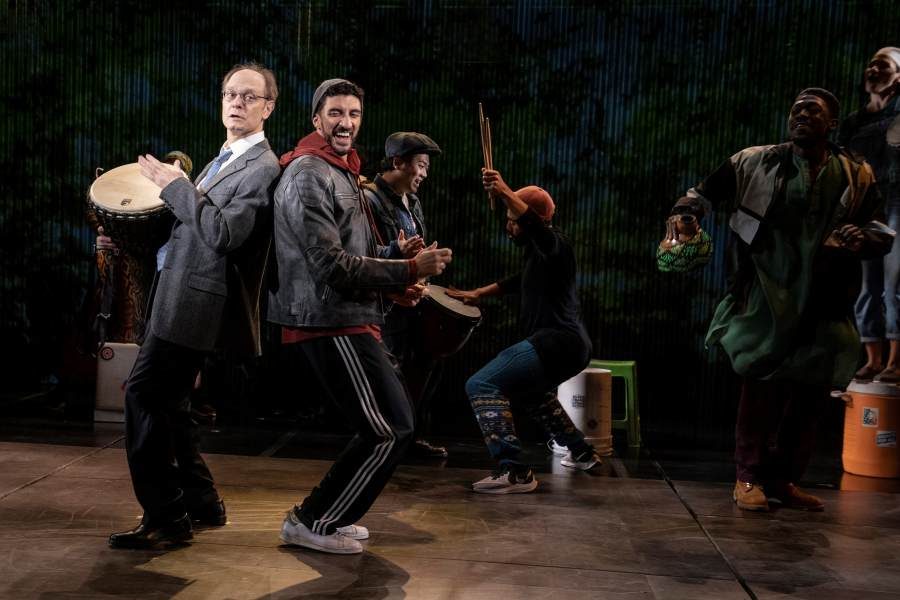 We have a conflict in America. While it is built on the shoulders of immigrants,and the Statue of Liberty stands tall in New york harbor, our policies discourage immigration.
Based on a 2007 movie starring Richard Jenkins,The Visitor at The Public Theater tackles some very current and heart wrenching issues facing the country today. Immigration, the treatment of illegal immigrants, deportation and its impact.

But are these topics for a musical? Looking at the creatives one would think so. With music by Tom Kitt, lyrics by Brian Yorkey, a script by Kwame Kwei-Armah with direction by Daniel Sullivan, The Visitor was poised to become another Public Theater success. So why isn’t it?

Walter (David Hyde-Pierce looking worn and beleaguered ) is suffering from malaise. He’s been teaching the same class at a college in Connecticut for twenty years. His beloved wife has died and Walter is disheartened and lost inert. Coerced into attending a conference in NYC, he arrives at his pied-a-terre, only to find a young couple living there. On a whim, he allows them to stay. Tarek (Ahmad Maksoud) plays the African drum and Zainab (Alysha Deslorieux) makes jewelry. Attracted by Tarek’s warmth and exuberance, Walter feels his natural reserve and ambivalence begin to thaw and he begins a slow return to life. Tarek shares his love of music with Walter and teaches him to play the African drum. He even brings him to join the drum circle. However, after one such visit, Tarek is picked up by the police and later detained by ICE when it is discovered that he is in the country illegally.

Walter feels a personal responsibility to help get him out of detention and Tarek’s mother arrives and the two join forces. As Tarek’s mother, Jacqueline Antaramain offers the hope of a new life for Walter.

Hyde-Pierce is worn and buttoned up. His voice is fair and although not strong, the slightness of it befits this shell of a man. Maksoud is like a rambunctious puppy, overly friendly and anxious to make friends. Deslorieux is more believable and her beautiful voice is one of the highlights of the production.

Sadly the music is a disappointment. Songs go on too long and the lyrics and rhymes are simplistic. Making up for it are the drum circle numbers which are absolutely wonderful, making it near impossible not to move to the rhythms.

But the drumming alone isn’t enough to compensate for the weaknesses of the musical. The controversy about illegal immigrants rages on and the musical offers little new. The themes of “The Visitor” can be found almost daily on the front pages of the newspapers, but despite being two-dimensional, they are more compelling than the show.

Merrily We Roll Along
Some Like It Hot
Almost Famous: The Musical
The Butcher Boy