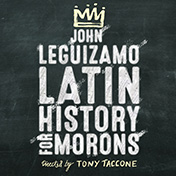 A sold-out run at The Public Theater. A record-breaking engagement at Berkeley Rep. Endless critical and audience acclaim. Chalk it all up to the mad genius of Emmy Award winner John Leguizamo, standing at the head of the class in his one-man tour de force, Latin History for Morons.

When his son gets a school assignment on heroes, John seizes the chance to teach him all about the great minds of the Latino world. But once he sets out on his irreverent crash course across three continents and 3000 years of history—from conquistadores to cumbia, Montezuma to Menudo, and taking on the characters in all of it—he uncovers provocative truths that shock even him.

Uproarious, uncensored, and undeniably entertaining, Latin History for Morons schools all of us in the heroes of the past, and those present right at home.

Playing at the historic Studio 54 Theatre, John Leguizamo’s Latin History for Morons is a high-energy, well-researched one-man show in which Leguizamo strives to show his young son (voiced by Leguizamo as well) that there are Latino heroes past and present despite the school system never teaching about them. In 90 minutes, complete with music, dance and a gigantic chalkboard, Leguizamo journeys through time to satirically show how the Tainos, Aztecs, Incas and other native tribes of the Americas have fought in every single war in the USA all while making major contributions in every aspect of life, from tomatoes, potatoes and chocolate to medicine and basketball. It is an interesting, educational and cutting take on the history everyone knows is there but do not know enough to actually discuss with anyone else, leaving everyone to wrongly assume it must not be important. Therein lies the crux of the school bully’s harassment of Leguizamo’s middle-school son, whom Leguizamo calls “Buddy” during the show. Buddy is, Leguizamo says, the student the other kids “go to first for homework and the last they ask to the dance,” a sad, sobering statement to hear any parent relate about their c …Read more