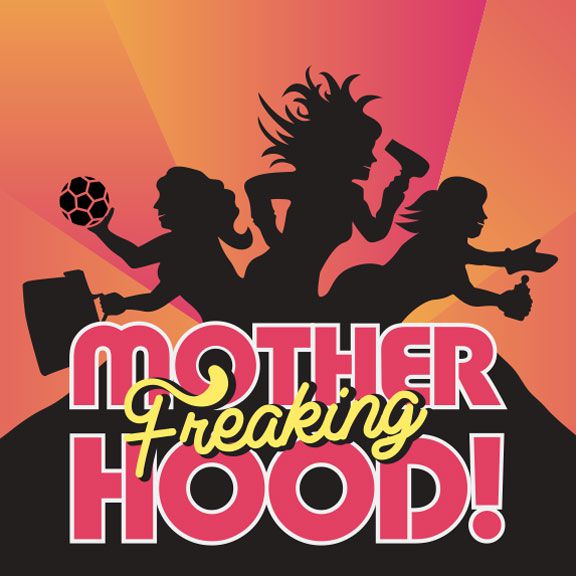 Celebrating the mother you never thought you should be.
Rachael, wide-eyed and optimistic, is elated to finally put her party days behind and become a mom… #YAY! Angie has pre-enrolled her unborn child in the most exclusive all-girls preschool (definitely a girl, she already has a boy). After three kids, Marcia thought she was done. Is it bad that she doesn’t want to cancel her wine of the month club or stop having sex on her back? With a soundtrack ranging from rock to pop to funk and more, join these three unlikely friends as they bond in the trenches from pregnancy tests to empty nests, dominating the diapers and tackling the teens with unmotherly charm, one bottle at a time!
Recommended for ages 16+

This isn’t your mother’s musical. MotherFreakingHood! a manic matriarchal romp presented by the New York Musical Festival, sets the stresses of modern mothering to pop and doo-wop while adding humor that keeps audiences howling. Full of femme power and friendship, the show’s New York debut is directed by Terry Berliner and explores the wild ride of childrearing in a world where moms face the pressure to do it all while keeping their sanity – or maybe, as we see in one elaborate number, with a little help from “Mr. Xanax.” The show explores the bond between three moms-to-be who meet at the obstetrician’s office and start a lifelong friendship over their swollen bellies and shared experiences. There’s Rachael, the anxious and excited first-timer; Angie, the type-A planner pregnant with her second (“I know I’m having a girl – I already have a boy,” she says confidently); and Marcia, the wisecracking older one whose dream of empty nest freedom is scrapped by the surprise of her third. As they raise their children simultaneously, the women swap stories and lean on each other for support through everything from soiled diapers, school bullies and drivers’ ed. Real-life mom writers Julie D …Read more