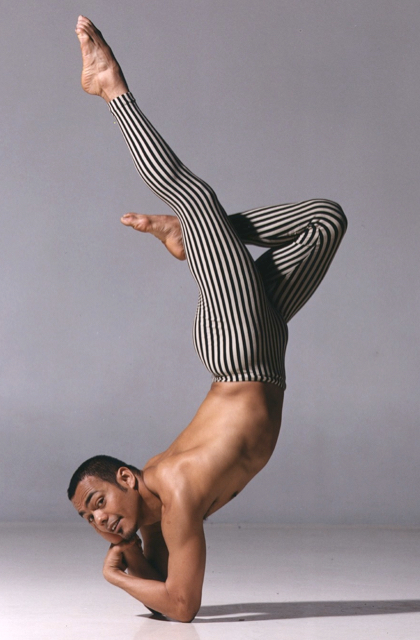 As a virtual dance institute, The Bridge will invite world renowned as well as up and coming dancers and choreographer to come to guest teach the class.  Advanced/Intermediate level professional or pre-professional dancers who are looking to explore beyond their own boundaries and looking for new dance experiences are encouraged to participate.  The core program is based on Nai-Ni Chen’s Kinetic Spiral, which is a cross-cultural dance vocabulary that integrates the Chinese martial arts philosophy in TaiChi with contemporary dance practices she studied in America.  Guest artists will cover a wide range of folk and classical dance styles.

Andrew Pacho created FLOW method for  his ANTI-GRAVITY dance company in 1990, a professional dance and gymnastics company, to help the performers maintain healthy joints and muscles while meeting the demands of the choreography. FLOW is a mixture of Gymnastics, Ballet, Graham, Horton, Gyrotonics,  and Yoga techniques.  FLOW starts by sitting on a sturdy chair, gently working through the full range of motion for every joint, muscle, and vertebra, creating heat and improved circulation to allow for greater flexibility and strength.  The class will then gradually speed up the movements to prepare for dance or rehearsal.  FLOW exercises can be modified for 15, 30 , 45, or 60 minutes segments.

YSDT’s master classes offer an environment of technical and artistic exploration for dancers of all levels.  The floor-based warm up draws on anatomic principles, pilates, and yoga to strengthen and warm the body in preparation for movement, which includes improvisational exercises and repertory phrases to enhance participants’ access to their own authentic voice.

In the midst of the COVID-19 crisis, the Nai-Ni Chen Dance Company has established a new dance institute through Zoom, The Bridge.  The Institute’s aim is to bring together dancers, choreographers and directors around the world to experience the master teachers of color whose practices are embedded in the community and are focused on advancing the art of dance that transform the personal, environmental and metaphysical spaces.

Greta Campo is the Associate Artistic Director of the Nai-Ni Chen Dance Company, She began her dance training in her native Milan at the Carcano Theater, where she was first introduced to Martha Graham’s work. She performed with the Martha Graham Dance Company in their 2012 New York Season and later on their international tour. Greta is a recipient of the 2016 Rising Star Award from the Fini Dance Festival.

Zoe Rabinowitz, Associate Artistic Director of Yaa Samar! Dance Theatre (YSDT), graduated from the Walnut Hill School for the Arts before earning her BFA in Dance from the Ailey/Fordham BFA program. In addition to her work as a founding member and principal performer with YSDT, Zoe has performed with companies such as INSPIRIT, JoAnna Mendl Shaw/Equus Projects, MBDance, Nia Love/Blacksmith’s Daughter, Urban Bush Women, and Anne Zuerner. Her own work for stage and film has been presented at festivals nationally and abroad in Austria, Bulgaria, Germany, Mexico, and South Korea.  As a teaching artist, Zoe has offered workshops and master classes in Germany, Japan, Jordan, Palestine, South Korea, and throughout the U.S.