POST A SHOW
Natasha, Pierre & The Great Comet Of 1812
Broadway 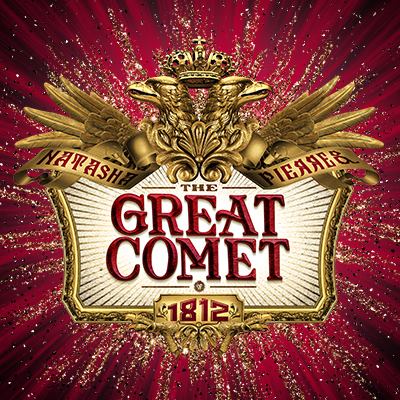 A StageBuddy favorite – such an exciting show! Natasha, Pierre & The Great Comet Of 1812 : Inspired by a 70-page slice of “War and Peace”, this “vibrant, thrillingly imagined new musical” (NY Times) is “stunning and blazingly original” (Entertainment Weekly) and brings us just inches from Tolstoy’s brash young lovers as they light up Moscow in a “heaven-sent fireball” (NY Times) of romance and passion.

Natasha is young, Anatole is hot, and Andrey isn’t here… but what about Pierre?
Natasha is a beautiful ingénue visiting Moscow while she waits for her beloved fiancée Andrey to return from the war. In a moment of indiscretion, she is seduced by the dashing (but already married) Anatole and her position in society is ruined. Her only hope lies with Pierre (Groban), the lonely outsider whose love and compassion for Natasha may be the key to her redemption… and to the renewal of his own soul.

“One of the decade’s best musicals” (Time Out NY), The Great Comet has “rousing music and ravishing performances” (Daily News) with a groundbreaking score that mixes rock, pop, soul, folk and electronic dance music with classic Broadway. The Great Comet arrives fresh off its sold-out run in Boston and its critically acclaimed 2013 Off-Broadway premiere. Its renowned creative team has reimagined the Imperial Theatre as an opulent Russian salon, where every seat provides a unique perspective and an unforgettable experience which is “thrilling, a feast for the senses”(Associated Press) and “inventive, ravishing and full-on romantic” (NY Post).

Interview: Costume Designer Paloma Young on Creating the Looks of ‘Bandstand’ and ‘The Great Comet’

From Imperial Russia to Neverland and Sherwood Forest, costume designer Paloma Young has become the go-to woman for clothes that can evoke fantasy while being grounded in reality. Her work can be currently seen on Broadway in Bandstand and Natasha, Pierre & The Great Comet of 1812 (for which she received her second Tony nomination, she won in 2012 for her work in Peter and the Starcatcher) two shows that couldn’t be more different than the other. Bandstand takes place in the post-WWII years and deals with working class people and army veterans who try to find joy through music, while the characters in The Great Comet are conniving aristocrats who find a cure for their ennui in manipulation and forbidden affairs. Set more than a century apart from each other, the shows are a perfect showcase for Young’s versatility, she has also designed contemporary pieces like Verite and fairy tales like Tangled and Frozen. In The Great Comet audience members have the opportunity to see Young’s work up close, as the actors spend most of the show moving within audience reach, allowing the details in the costumes to be admired and appreciated in a unique way. But one gets the sense Young’s work …Read more