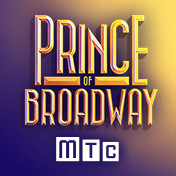 Prince of Broadway: His musicals made theatrical history. This musical shows you why.

Harold Prince is a legend in the American theatre – the acclaimed director and producer behind a long list of America’s most iconic musicals and the winner of a staggering, record-breaking 21 Tony Awards. Now, he’s bringing together six decades of magical moments in a new musical event, Prince of Broadway.

This thrilling night of theatre includes hits from such celebrated musicals as West Side Story, Fiddler on the Roof, Cabaret, The Phantom of the Opera and more, in an unforgettable tribute to an unmatched Broadway career.

Interview: Michael Xavier on Getting to Play the Great Roles of American Theater in ‘Prince of Broadway’

Two-time Olivier Award nominee Michael Xavier recently took Broadway by storm playing opposite Glenn Close in this year’s revival of Sunset Boulevard. Only weeks later, he’s back at the Great White Way starring in Prince of Broadway. We caught up with him about working with Hal Prince, playing some of the great roles in the American theater, and what it’s like working in New York versus London’s West End. It seemed like a really, really fun and exciting thing for an actor to get to play all those roles and work with Hal Prince and Susan Stroman. Yeah. It’s kind of the dream job, really working with such an amazing creative team and cast as well. It’s an incredible group of people. As an actor getting to play all the different characters in different shows, putting on a different hat every few minutes is what I love to do, so it’s a dream. What was it like to be in a room with Hal Prince as he revisited all of these shows that have been such integral steps in his career? Did he have amazing stories? Also, what was it like to portray these roles that have become such important parts of musical theater, and Broadway, and just culture in general in this day and age? Firstly, being in t …Read more