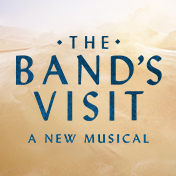 The Band’s Visit, a critically acclaimed new musical and New York Times Critics’ Pick, arrives on Broadway this Fall 2017 direct from a sold-out engagement where it was hailed as, “A place you want to visit if you’re looking for signs of new and exciting life in the contemporary American musical” (Ben Brantley, The New York Times).

An Egyptian Police Band arrives in Israel to play a concert. After a mix-up at the border, they are sent to a remote village in the middle of the desert. With no bus until morning and no hotel in sight, these unlikely travelers are taken in by the locals. Under the spell of the desert sky, their lives become intertwined in the most unexpected ways. The Band’s Visit celebrates the deeply human ways music and laughter connect us all.

“It doesn’t feel like any musical ever. It doesn’t sound like anything else you’ve heard. Perfect is the wrong word for such a rangy, unusual musical, but it’ll just have to do.”– Jesse Green, New York Magazine

“Once, not long ago, a group of musicians came to Israel from Egypt.” So begins The Band’s Visit, the David Yazbek/Itamar Moses-devised tale about the denizens of a sleepy Israeli town, and the staunch Egyptian police band who walks into their world when a mix-up at the border prevents them from catching the right bus to their concert. While the remaining lines assert, “You probably didn’t hear about it. It wasn’t that important,” we’re sure glad we did hear about it as the intimate musical, with its all-too-prevalent themes of love, unity, and everlasting connection, has captured hearts, shaken up emotions, and invigorated audiences all across the city since it debuted on Broadway in November 2017, following a critically acclaimed Off-Broadway run last Spring. Now, still going strong on the Main Stem, this inevitable Tony magnet gives us reason to rejoice anew, as the luscious melodies and profound, poetic lyrics of Yazbek’s sweeping score are now preserved for eternity on an original cast album off the Ghostlight Records label, due out for official release ‪on February 23rd.‬ In honor of the album’s drop date, we took a step back and examined the themes of a piece as a whole, pic …Read more