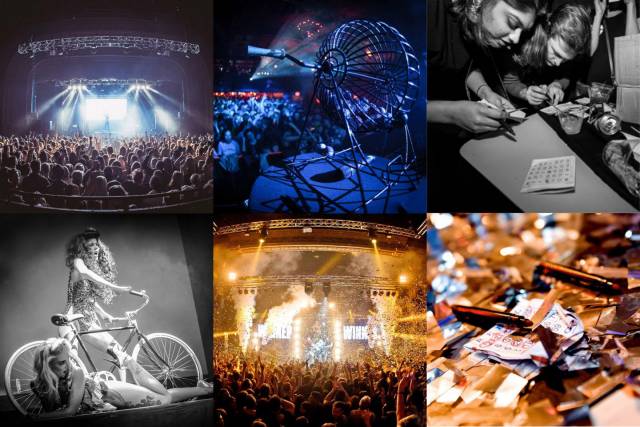 There is no denying that bingo endured an awkward phase in the ‘90s. In fact, that awkwardness persisted into the early ‘00s until technology revitalized the game. For more than a decade, the growing selection of new bingo sites has introduced the game to younger players who are decidedly more adventurous than the clichéd older players of the ‘90s. And this has helped to inspire cities like New York to throw wild bingo parties.

Before growing into a global bingo party with a presence in the USA, UK, Spain, and Portugal, Rebel Bingo ironically hosted its first event in a London church hall, the very same type of venue that your grandparents could go for a bingo game. Following that cold night in January, it has been a rapid rise for Rebel Bingo.

In explaining the rise, it must be pointed out that the organizers wanted Rebel Bingo to be loud, intense, and emotional – qualities not generally associated with traditional bingo. The organizers had clearly found a popular idea, as Rebel Bingo expanded throughout UK cities and music festivals. Not long after, Rebel Bingo arrived in the Big Apple and Rebel Bingo New York was established.

Rebel Bingo is more akin to a club night than traditional bingo. Attend an event and you will be plunged into a club environment with pumping dance music and lots of excited attendees. Rebel Bingo hosts dress up in elaborate costumes while being accompanied by glamorous models you would expect to see in the world’s best clubs. The appeal is certainly obvious, with attendees guaranteed one of the most memorable experiences of their lives.

The organizers of Rebel Bingo work tirelessly to maintain their underground image. For added perspective, the events initially began as invitation-only and were hosted in basements because they did not actually have a gambling license. And although they now operate in the mainstream, there is still a dedication to making Rebel Bingo feel edgy.

Enter the doors of Rebel Bingo New York and you will be warned to utter the word bingo, but that is just a part of the act. The game itself is completely wild, as you are more likely to win a cuddly panda rather than a couple of bucks. A final word of advice is that you win based on enthusiasm rather than being the first to complete your bingo card.

Not Your Standard Bingo

Go to New York’s Standard on Sunday evenings and you will discover Not Your Standard Bingo, an event will also make you forget about the older image associated with bingo. Organizers have to re-energize the game by appealing to young professionals who want to get a little wild as they play a familiar game.

More than five years after founding and the Standard’s bingo nights are still extremely popular in New York’s Meatpacking District. Locals love to attend a bingo night where they might have to dance on tables against a rival in order to settle a tie.

Dance-offs, parties, and cocktails have even proven to be draw for celebrities. Shrek star Cameron Diaz is the most famous so far. She even hosted a round of Ball Karaoke, which requires the announcer to sing while replacing lyrics of a song with the word ball.

New York’s historic Village Gate plays host to a multimedia art cabaret called Le Poisson Rouge. Le Bingo is one of the regular events hosted as part of Le Poisson Rouge, having risen to prominence on the back of its sheer popularity. You can now attend Le Bingo every Friday and Saturday evening.

Linda Simpson hosts the event alongside a troupe of ‘spokesmodels’, all the while delivering wisecracks throughout to create an engaging atmosphere. Players can even sit down for a meal and cocktails to savor the experience. Cash jackpots and stranger prizes are awarded to the winners, with giggles never far away.

The drag and burlesque style of Le Bingo make it decidedly more intriguing than whatever else you might be doing on normal weekends. For good measure, there is even a DJ who is ready to drop fun tunes. Admission is free, with it optional to purchase the $2 bingo cards.

A Night Out at Resorts World New York
Have a Glamorous Dinner at STK
Dining With Ninjas
Forbidden Planet: Nerd Paradise