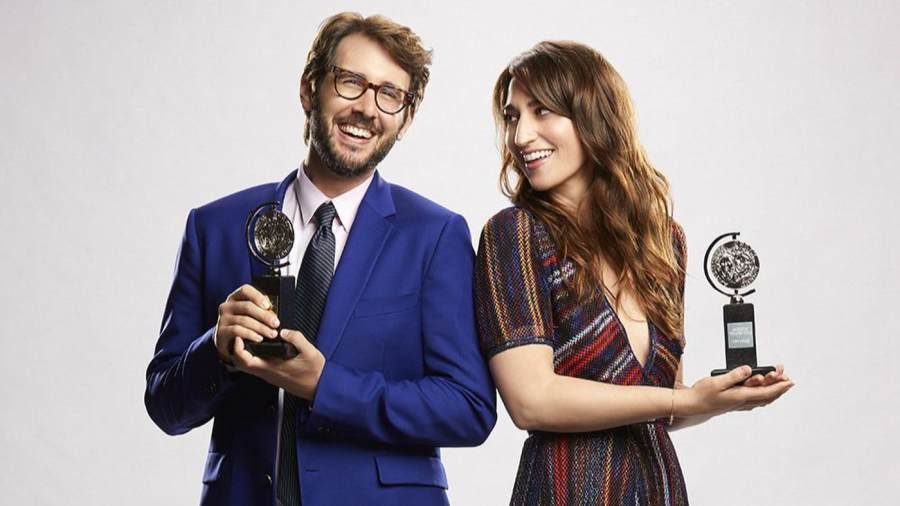 As any Broadway nerd can tell you, there's simply nothing like live theatre, and nowhere was that more evident than the 72nd Annual Tony Awards. With everything from splashy musical performances to topical jokes and jabs, right down to that noteworthy bleeped-out buzzword, this year’s ceremony was one for the books, and whether you were thrilled with this year’s crop of winners or wished your faves were favored more, we’re sure you can agree. We here at StageBuddy watched very intently, taking copious notes on the best bits and segments, which we’ve compiled into a list of “top five faves” from Tonys #72.

Ranging from the poignant to the preposterous, these are the moments we felt best encapsulated the magic, marvels, and undeniable sense of optimism emanated throughout the telecast. Can’t wait to relive it all? Scroll through and enjoy!

Turns out it’s true what they say: two heads are better than one! First-time emcees (and Main Stem alums) Josh Groban and Sara Bareilles proved to be quite a successful pairing with their snappy dialogue, fast-paced transitions, and memorable musical performances, delighting Radio City-goers and home audiences alike… to the tune of a 4% ratings spike from last year’s single-hosted telecast.

Whether hilariously swapping show clothes, lamenting the grind of an eight-show week schedule, attempting a few Harry Potter-inspired tricks, or saluting theatrical legends in song, this dynamic musical duo came out in full force, ready to play, and delivered in spades across the board, providing a bouncy, lighthearted evening to combat the destruction associated with our reality right now.

Proving their ability to roll with the punches, one particular ROFL moment came in the aforementioned sorcery segment, when Bareilles was showing off her knack for magic to Groban. When the effect failed to initially align with the “Brave” singer’s delivery of the magic words, she deadpanned, “It was a delay, but it’s pretty good, huh?” to which the audience roared.

Oh, Sara and Josh. You’ve caught that Broadway bug. And we’re oh so glad you have.

If it wasn’t already evident by The Band’s Visit’s near-sweep of awards, in response to the shaky state of our government, one of the more prominent themes permeating throughout the evening was that of unity and hope. From Tony Kushner’s reminder to get out and vote in the midterms and Andrew Garfield’s plea to “just bake a cake for everyone who wants a cake to be baked” to David Cromer’s warm words to those struggling with depression and Glenda Jackson’s referential assertion that “America has always been great,” the theatrical community certainly wasn’t shy, and their stance on these issues rang out loud and clear.

Newly-minted Lindsay Mendez and Ari’el Stachel, meanwhile, addressed these issues from their perspective as theatre artists, she praising the community for “celebrat[ing] diversity and individuality” (“To all of you artists out there, just be your true self and the world will take note!”), and he commending the show’s creators for their courage in telling a story of foreigners living in harmony “at a time when we need [it] more than ever,” before instilling the audience with the notion that “your biggest obstacle may turn into your purpose.”

But none seemed to drive the point home more than Groban and Bareilles’ inspirational opener, which, while jokingly referencing the losers of the evening, was, at its heart, a celebration — an all-out ode to everyone who keeps theatre alive. With its optimistic spin on the global events of late, it hit home with its meaningful message urging aspiring artists, professionals and amateurs alike, to forge ahead and keep on keeping on, because “if you make art at all, you’re a part of the cure.”

Don’t we know it. In these trying times, it’s exactly that type of Broadway bad-assery we need. Rock on, dreamers. This one’s for you. 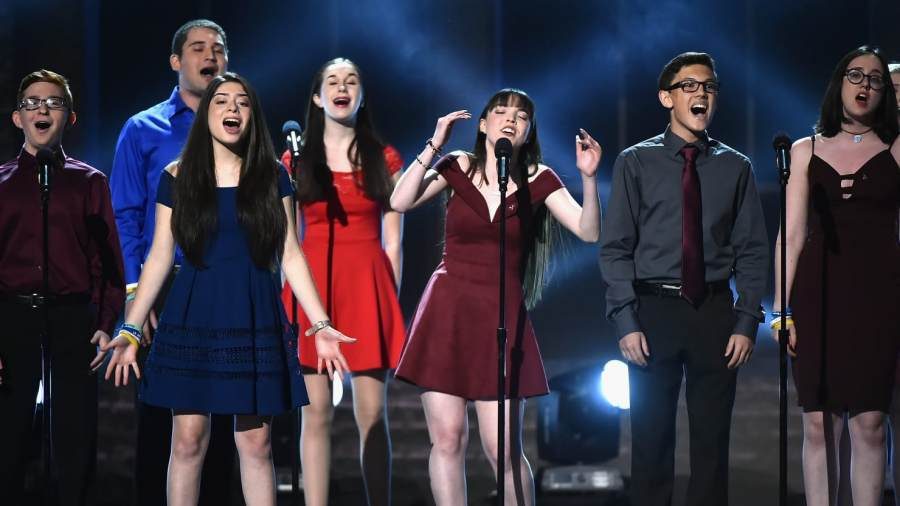 Parkland Survivors Help Us to “Remember the Love”:

But evoking that spirit of resilience wasn’t a job limited to celebrities alone. Following the presentation of the Excellence in Theatre Education Award to Melody Herzfeld of the Marjory Stoneman Douglas High School, the Parkland, FL-based site of the unthinkable February 14th shooting where the longtime drama director sheltered over 60 students from the gunman and ultimately saved all of their lives in the process, presenter Matthew Morrison took to the stage to express his gratitude to the honoree.

Having participated in a Broadway-themed benefit concert alongside several of the Parkland survivors, Morrison spoke candidly of his firsthand experience, with emphasis on the overwhelming effect of watching these warriors — just as Herzfeld had encouraged them to — express their feelings of rage through the restorative avenues of music and art. In a move kept secret from nearly everyone in attendance at the ceremony, he then introduced surviving students of the MSD drama department (the same group Herzfeld shielded from the gunman), who moved us all with their emotional delivery of Rent’s iconic anthem of love.

“We all want the same thing — we cannot deny it,” Herzfeld said earlier in the evening, upon accepting her award. “To be heard, to hit our mark. To tell our truth. To make a difference.” No doubt she and the Parkland survivors succeeded in doing all of that with what is sure to go down as one of the top ten memorable moments in Tony history — a heartfelt remember to eternally measure our lives in love.

And The Tony Gods Heard Our Prayer!:

In an evening filled with snubs and surprises (congratulations, Laurie Metcalf! Maybe next time, Tina Fey!), none was more delightful for our StageBuddy crew than Once on this Island’s unexpected triumph, deeming Michael Arden’s radical re-imagination of the 1990 Ahrens and Flaherty island tale the Best Revival of a Musical of 2018.

“This is not how I expected [the] night to go,” producer Ken Davenport admitted in response, upon accepting his award, before adding “This is a business where you hear ‘no’ an awful lot….to all the [dreamers], do not stop asking your questions. It’s amazing what can happen. You can get to your ‘yes.’” He and the OOTI producers certainly did. Mama said she’d provide, and she certainly came through with this one!! Congratulations to all involved on a spectacular, well-deserved win!

I Dreamed a #TonyDream in Times Gone By…

As announced on The Late Show with Stephen Colbert late last week, our Tony-losing hosts with the most unveiled an ongoing new creative campaign at the top of Sunday’s broadcast.

Dubbed #TonyDreaming, the movement  cleverly called upon viewers to take to social media and post photos of themselves performing in amateur productions — be they from childhood or present day, depending on the age of the viewer — when they were, as the hashtag suggests, dreaming of the day they’d win the Tony Award.

To supplement the influx of “amateur” posts, celebrity presenters joined in on the fun, among them Claire Danes, Tituss Burgess, Katharine McPhee, and Patti LuPone, whose past roles community and school theatre roles were plastered along the sides of the proscenium as each of them were introduced.

It all culminated in a rousing finale, dedicated to the dreamers, as a flurry of TwitPics, Insta photos, and Facebook messages accumulated throughout the evening, flooded the screens behind the co-hosts, whose closing serenade echoed the sentiment of their opener.

Their message was simple, and confirmed what had been consistent throughout the ceremony… what we as theatre nerds have known since day one… that now and forever, in the most bleak and hopeless of times, art really does have the power to heal. #BroadwayStrong #HerestotheFoolsWhoDream

Special recognition goes out to Tina Fey, who proved she totally can sit with us after her deadpan delivery of the Mean Girls introduction (“All four of tonight’s Best Musical nominees are based on movies. But only one of these movies paid for my boat”), and of course, for inciting one of the most buzzed-about moments of the telecast as a whole, to Robert DeNiro, who one-upped the much-anticipated Springsteen performance he was presenting with a direct, concise, and ever-so-eloquent message to our Commander-in-Chief: “F*ck Trump.”