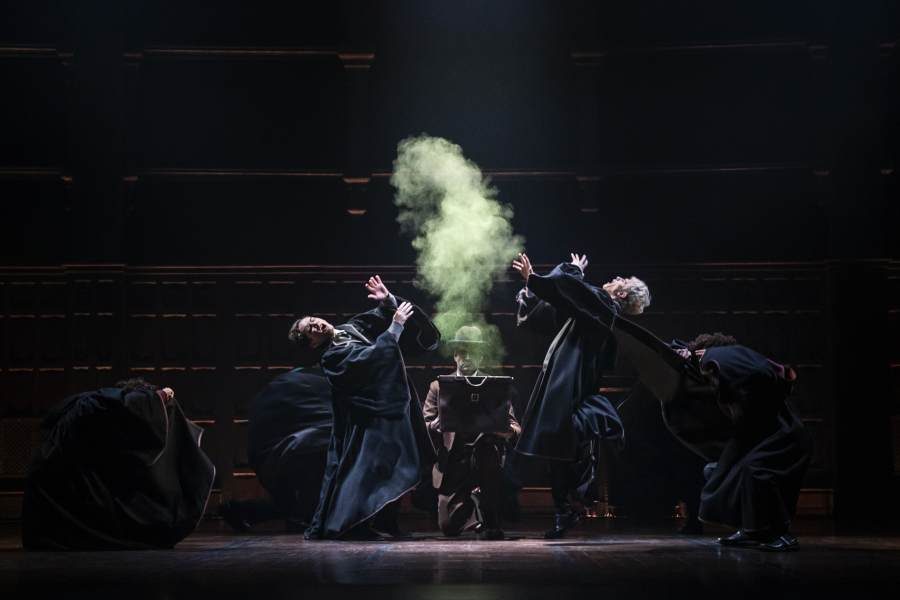 It’s been almost 25 years since the 1997 release of the first Harry Potter book. Its young readers have grown up, gotten jobs and now have families of their own. Do the Harry Potter characters, Harry, Hermione and Ron's lives mirror their own?

Considered the 8th book in the HP series, “Harry Potter and the Cursed Child,” a play by J. K. Rowling, Jack Thorne, and John Tiffany, begins 19 years after the last Harry Potter novel ends. Harry married Ginny Weasley and they have three children. The eldest is named after Albus Dumbledore and Severus Snape. His name and his father’s reputation weigh heavily on the young boy, the child in the title of the play.

Now the dreaded day has arrived ,and Albus waits to catch the train for his first year at Hogwarts School of Witchcraft and Wizardry. He’s convinced that he will not live up to everyone’s expectations. His cousin Rose, daughter of Hermione and Ron, warns him to choose his friends carefully. Albus immediately befriends Scorpius Malfoy, son of Harry’s enemy. Poor Scorpius has his own burdens since there’s a rumor that he’s actually the son of Voldemort, so naturally, no one wants to be with him. Recognizing a kindred spirit, Albus sits with him. Upon arrival at the school, much to his chagrin, Albus is sorted into Slytherin House rather than Gryffindor, his father’s house.

Released pre-covid in 2016, “Harry Potter and the Cursed Child” was first presented in two lengthy parts. Despite being six hours, the play was a hit in London and made a successful transfer to the US. The first time I saw the show, I attended the matinee, went for dinner and then returned for the evening show. Now the two parts have been consolidated into a dense fast-paced 3 ½ hour show at the Lyric Theatre.

The first few years at Hogwarts move very quickly, and quite frankly, the actors speak too fast, as if trying to rush to get through the material. It took me a few minutes to acclimate to the British accents, especially when the boys spoke.

On my first visit, I noticed several younger people in the audience. Many of them were dressed up in ‘house’ colors, wearing scarves and robes. This time I looked around the theater and was somewhat saddened to see mostly adults, maybe because of the pricey tickets as well as the length of the play.

However, this time, I brought my own younger person to gauge the play through her eyes. The 8 ½ year old, who has read all the books as well as the script of the play, was mesmerized by the action onstage. Although she knew what was going to happen, she still cowered in fear during some particularly scary scenes, proving the effectiveness of the frightening characters and effects.

The special effects are probably the best part of the play. (Chris Fisher, International Illusions and Magic Associate, and Skylar Fox. Illusions & Magic Associate.) Several characters flip about in the fight scenes and cast magic spells with wands glowing. Characters morph into others and some dissolve into bookcases. The length of the play may be a deterrent for younger audience members, which is unfortunate since they are the ones who’d enjoy the special effects the most.

While the beginning of the show is rapid-fire, the ending feels almost painfully slow. Perhaps it was because the audience had been sitting there so long. There are a few surprises but there’s an expected reconciliation scene that dragged on.

One of the main plot lines involves Albus trying to undo action in one of the early stories, the death of Cedric, a minor character. The boys get hold of a time-turner and travel back in time to fix things. Naturally there are direct consequences since one change in time leads to other, often unforeseen changes.

Do you need to know Harry Potter to enjoy the show? The play makes several references to prior storylines and includes brief appearances of some of the famous characters in the first seven books. The playbill doesn't list the characters next to the actors’ names as if to keep the appearance of certain characters as a surprise.

A viewer won’t ‘get’ the references unless he/she is already familiar with Harry and his adventures. Although the characters are wizards who wield wands and cast spells, the play is really about friendship and the love between fathers and sons. That is universal, even if you don’t have magical powers. Despite the 3 plus hours, HP & the Cursed Child is worth seeing - especially for the generation that grew up on it.