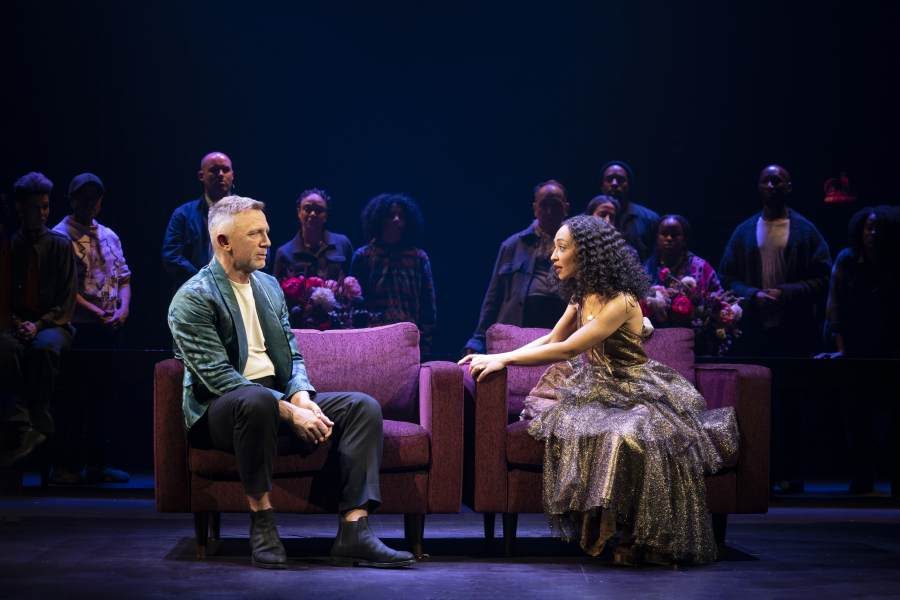 There’s something to be said for star power filling theater seats. Despite some tepid reviews for the latest version of Shakespeare's Macbeth, the Longacre Theatre was filled. And why not? It stars Daniel Craig (the most recent James Bond) and Ruth Negga.

When Craig makes his first appearance, the gal sitting next to me audibly gasped. Ah, yes-she was obviously a lover of Shakespeare .Having played Iago Off-Broadway, Craig is a credible villain here. He is good but many of his speeches become vehement rants and show little variation.

Ruth Negga, star of the movie “Loving,” makes a superb Broadway debut as the feisty Lady Macbeth. Slight yet forceful, she fills a stage with her beautiful speaking voice and commanding presence.

Directed by Sam Gold, the play moves quickly but is not without flaws. Most directors find it necessary to make Shakepearean shows unique, to put their own stamp on them. This show, too, has its gimmicks- two performers are constantly ‘pumping ‘ smoke from smoke guns on stage. The smoke makes for smooth transitions from scene to scene and also is an effective device when Banquo's ghost appears. Sometimes the gimmicks throw off the mood. In the midst of some soul-searching and agonizing, Macbeth opens a Lite beer.

By the end of the play, and as is typical with many tragedies, all the principals have died. The battle’s been bloody but the bad guys have been vanquished and the succession of the throne is secure. Rather than let the audience reflect somberly on the tragedy, the mood shifts. All the performers come out, sit on the floor of the stage and drink soup. (undoubtedly the ‘potion’ the witches have been preparing throughout the show. )One of the young performers sings while the other listens to her. It was actually disconcerting and diminished the tragic elements of the play about a power-hungry man and the destruction his ambitions create.

Except for the leads, the actors all play multiple roles and the play makes no effort to disguise the shift in parts. Maria Dizzia goes right from playing one of the witches to portraying Lady McDuff with no change of costume. Right in front of the audience, Paul Lazar morphs from being the bloody corpse of King Duncan to taking off his padded stomach to assume the role of the porter.

The weird sisters all play other parts. There are few props, save a long table which serves for dining and also a bed and a couple of armchairs. Macbeth has a color-blind and gender bending cast. Banquo is played by Amber Gray, yet I was surprised that her pronouns were changed. Macbeth is bloodier than one usually sees in Shakespeare and there was a pretty intense fight scene between Macbeth and Macduff. (bloody too)

Ironically, the witches that are a unique feature in Macbeth are ordinary. The actors wear normal clothing and are not fearsome. After seeing the recent movie version of Macbeth with Denzel Washington where the witches were positively eerie, I was hoping for something awesome.

I guess the awesome thing is the presence of Craig. At least that’s how the gal next to me felt. And it was enough to get her and many others to fill the seats.