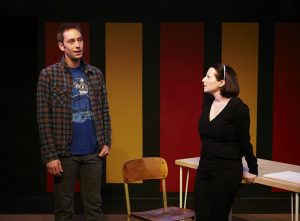 Tongue in Cheek Production's "Buffalo Heights" is a mostly funny look at what can happen in small town Buffalo, NY when a new French teacher is brought in to take over the high school class that a Congress woman's daughter thinks she controls. Heads butt, egos, careers, and even lives are damaged, and moments of good comedy ensue in this new 90-minute work from playwright Adam Harrell.

The play goes from serious, to funny, to downright absurd at moments (the school statue coming alive during a drug induced hallucination scene brought the house down laughing). And while there were moments where the pacing of either the script or the direction lagged too much, the show was generally entertaining throughout.

Jake Lipman, who also directed, stars as the French teacher.  The ensemble cast of talented actors includes a standout performance from Joe Mullen as the consistently funny school security guard, who continually breaks the rules while taking great pride in his fumbling work, and a small but impressive turn by Nina Leese, a very powerful actress and presence on stage.

Shetler Studios has long been offering a home to new plays in its theater spaces. "Buffalo Heights" is Tongue in Cheek Production's first full length premiere, and a sign of nice things to come.

"Buffalo Heights" continues through May 17th at Shetler Studios.