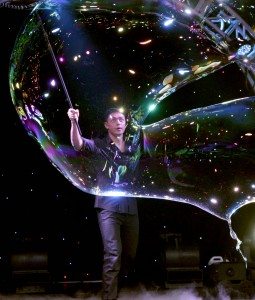 No. The Gazillion Bubble Show is not “theater”; it is pure spectacle. It is exuberant, full of every child's bubble dreams, but on steroids. If I could count the number of bubbles that were created in each show, I imagine it would be more than a gazillion, but as I can't, we will happily go with their count.

The show, which has been running for many years now, and with franchises all over the world, is the impressive cottage business of the talented and entrepreneurial Yang family. The two times I have seen the show in New York -- this past weekend, and two years ago -- Deni Yang starred. He is the son of show creator Fan Yang and his wife, Ana. The other family members take turns and also run the shows in other locals, like Las Vegas, Tokyo, etc.

While there is some attempt to bring more meaning to the show, as well videos of Deni as a youth performing and making other children happy, the real star of the show is the bubbles. This starts off rather simply with small bubble miracles, performed much the way intimate magic shows are done, with everyone leaning in just a bit to get a better look.  But as the show progresses, the bubbles, the stunts, and the grandiosity increase. Before long, the audience finds itself — and the entire theater — swimming in bubbles that seem to be coming from every angle. An actual tidal wave of millions of small bubbles rolled out and covered us all; the kids, and even the adults, all screamed with joy, amazement, and excitement. This unusual experience is certainly not something that happens many times in one's life!

Sometime in the later stages of the 60-minute show, the gears change and Deni Yang brings out an entertaining laser light show. With laser lights coming from the floor, the ceiling, and all sides, Deny grabs them, and begins to twirl them around as if batons -- and as if they were no longer attached to their light source. How he does this, I could not begin to figure out, but it was fun to watch.

The real excitement began when during the laser show we began to see the emergence of a few bubbles. 'Ahh...' you could almost hear the audience thinking out loud, 'what's about to happen?'  Their expectations were met: more and more bubbles started appearing, mixing with the laser show to create a spectacular finale.

Objectively, one of the nice things about this show is that it knows what it is. It knows not to go on too long, engages the audience in all the right ways (including putting little kids in life-sized bubbles), and delivers just the right amount of all its parts to make a great little show. Subjectively, even as an adult who has seen the show once before, I could not help but enjoy it, and I felt like a kid while doing so.