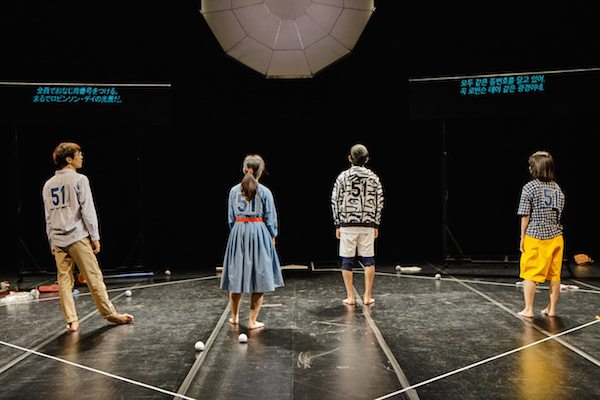 Toshiki Okada’s God Bless Baseball, performed in Japanese and Korean with English subtitles at Philadelphia's FringeArts, is a masterful exploration of the dangers of leaving home, or least home plate.  Through the eyes of two baseball-curious laymen (portrayed by actresses Sung Hee Wi and Aoi Nozu) Okada calls into question the rituals of the sport in an attempt to uncover the point of baseball.

One of the women notes early on that there is a great deal of downtime in baseball as players sit on the bench, stand in the field, or wait at a base.  We understand this feeling all too well as we watch the characters idle on stage and repeat each other's lines.  It is a testament to Okada’s ability to structure plays (and direct them, as he did God Bless Baseball) that an audience can sit in what could be considered an excessive amount of downtime and be utterly delighted by the experience.  The straightforward performances by the four cast members are captivating and comedically on point.  They are masters of their bodies, be it in the awkwardness of one character holding a bat for the first time or the arrogance of another who believes the bat to be an extension of his body and soul.  At all times they leave space for the audience to imagine themselves in the position of coach and player.

As it is in the U.S., baseball is a national past time in Korea and Japan, the nations from which the unassuming sportswomen hail from; as such both women desire to understand the essence of the game and why their loved ones are so obsessed with it.  They are joined by a character portraying a celebrity lookalike of Ichiro Suzuki (played by Neji Pijin), a famous Japanese Major League Baseball Player, who lobs a few softballs their way and ultimately articulates the popular appeal of baseball.

Ichiro begins to spray the others with a jet of water while philosophizing about leaving the safety of home to begin a journey that will ultimately only lead them home again.  As the meekest of the novices ventures within range of the jet stream for no discernible reason we begin to understand that only by leaving the safety of home will we be able to appreciate our safe return to it.  As the play draws to a close we cannot help but think that we, too, must risk the dangers of the world so that we, too, can feel the joy of coming home unscathed.

For information about upcoming performances at FringeArts, visit https://fringearts.com/