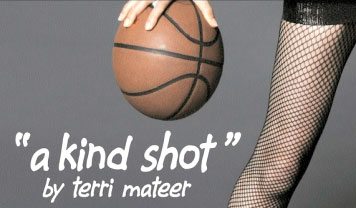 Recently I had the pleasure of seeing a one-woman show called A Kind Shot, a lovely, raw and emotional piece written and performed by Terri Mateer at the Davenport Theater in Midtown.

Walking into the theater, the first thing you notice is a bare set, typical of the black box style. But there’s a basketball court outlined with tape on the floor. This simple design works perfectly as Terri takes us through her life using basketball as her theme. You see, Terri is a beautiful, 6’1” tall woman who started playing basketball as a teenager, and wound up playing professional basketball in France. Just one part of her strange and fascinating story.

Being as charismatic and strong as one could ever hope to be, Terri opens her heart to the audience and tells us of a crazy, artistic life with little guidance from family. This led to a series of abuses, both emotional and sexual. Normally, I would be uncomfortable or incredibly sad as a story such as this unfolds, but Terri somehow keeps it light, charming and funny. She weaves her tale with an understated warmth that makes you feel like she’s your friend. It’s rather like you are just hanging out at courtside having a chat, rather than at a theatre seeing a play.

All in all, it’s a simple and straightforward show. It’s the story of someone who’s had a fascinating life, and also the mistakes along the way. Perhaps you’ll see yourself in Terri’s story, or see a similarity to someone you know. I feel that women, in particular, will find a connection to what Terri has to say, although there was definitely a strong response from the men in the audience as well.

After the show Terri took some time to do a question and answer with the audience, again making it a very intimate experience. I left the theatre happy that Terri found her voice and strength, and is able to share it with theatre audiences.

Susan Bell is a performer and teacher – www.bellsvoicecoaching.com