March 6, 2014
Theater Review
Review: How I Learned to Stop Worrying and Love the Gardaí 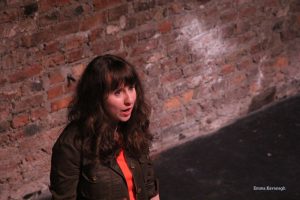 Liliana Ashman gives the impression of being a charming person and passionate theater maker. In her one woman show "How I Learned to Stop Worrying and Love the Gardaí" she refers to herself as a girl who once had "fire in her eyes." In the piece, an account of her "horrifying encounter with the National Immigration Bureau of Ireland," she expresses her desire to regain that fire by asserting herself as a free-willed defier of bureaucracy.

First I'd like to see her assert herself on stage. Ashman's piece definitely has its moments. At times she's funny. At times she's spirited. The three minutes she spends Irish step dancing -- she's very talented! -- are captivating. But from the beginning of the show she is apologetically herself. Now, this isn't entirely surprising; she plays herself, after all. But why, I wondered, does she seem embarrassed by that? It's almost as if the performer Lili thinks that if the character Lili publicly wills it, her self-assurance will spring to life. Not so if the performer isn't herself convinced. How will she convince the audience?

Over the course of the play Ashman also portrays her boyfriend -- an Irish national and her ticket to citizenship -- and several government officials. But she never fully assumes the roles. After the initial suggestion of an Irish accent she returns to herself, telling her story like it's a lesson to be taught. A lesson about "borders and nations and patriotism" (in the words of the great Ruth Gordon) and the conflicts they provoke. She makes a valiant attempt to liken her experience with the Irish Gardaí to Mexican/American border patrol. As a New Mexican native, she can probably volunteer some valuable knowledge. But while her difficulties with the Gardaí seem unpleasant, they can hardly be considered horrifying. Therefore the gap between Liliana Ashman and Mexican deportees remains vast.

I don't think this escapes Ashman. She acknowledges the uncomfortable parallel near the end of the piece. She also admits that no, she has no love for the Gardaí. She has a reaffirmed dislike for arbitrary legalities. But don't we all? If Ashman just reconciled herself with the humor of what I think is secretly a curmudgeon's f**k you to airport staff -- accents and all -- "How I Learned to Stop Worrying" would be a truly hilarious, and truly relatable, piece of theater. Lili just has to take the plunge.

"How I learned to Stop Worrying and Love the Gardaí" runs through March 8th as a part of FRIGID New York.

At UNDER St. Marks through Mar. 8.

A Brooklyn-bred graduate of Bard College. Lover of the spoken and written word. A natural-born waver of the white glove, she consistently demands satisfaction. Just kidding. Kind of.