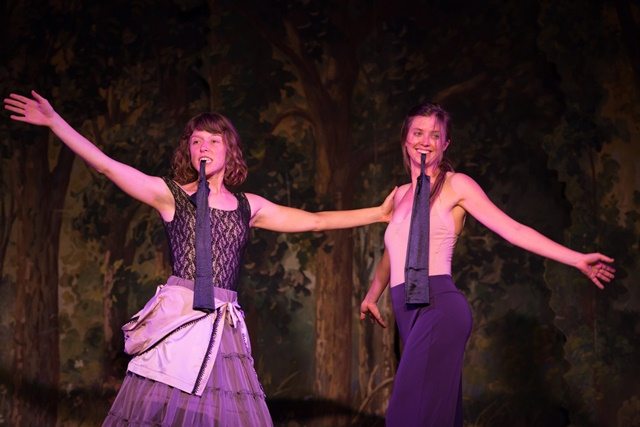 Annie Wilson’s Lovertits, presented by Bryn Mawr College Performing Arts Series, is not for the prudish.  Under Wilson’s direction, performer/creators Christina Gesualdi, Jenna Horton, and Ilse Zoerb walk a thrilling line between pedestrianism and theatricality when it comes to nudity and the objectification of the female body.

Lovertits is not easily classified as dance, theater, performance art, or burlesque.  It is playful to the point where two of the women (one of whom was successful) lean in to make out with audience members in the middle of a scene they are reenacting from Louisa May Alcott’s Little Women.  It is in these moments when it is least clear what kind of performance we are watching - or participating in - that Lovertits is most alive.

Gesualdi’s entrance at the top of the show promises an evening of casual strangeness and a combination of discomfort and delight that does not disappoint.  Zoerb follows this up with witty, post-striptease audience repartee full of puns and Bryn Mawr-specific references that left the audience feeling both shy of her perspicacity and desirous of more.

The willingness of all three performers to be silly with their nude bodies and lighthearted in their exploration of the audience’s boundaries is a core intrigue of the piece, and there is a large portion dedicated in part to the inoculation of the audience to being in the presence of bare breasts. The adjustment time to seeing naked performers for ninety minutes would be necessary but for the fact that the audience is desensitized to nudity in an early and highly theatrical portion of the piece with the introduction of the character Jenna Ben Frankly (Jenna Horton), who boldly demystifies the female body and takes the audience on a tour of important historical locations as they relate to her body from breasts to clitoris, all frankly on display.  Throughout the performance, the audience is simultaneously asked to forget that there are three self-aware, naked female performers in front of them and reminded that they are viewing work that is letting us know that it is high time we end the objectification of women.  At its best, this is intellectually stimulating.  At other times the performers are so involved in playing with each other through mirroring each other’s movements that the audience can feel excluded and disengaged.

Lovertits is a bold exploration of forms both performative and corporeal; territory ripe for theatrical exploration and intellectual consideration and a disorienting pleasure to partake of.