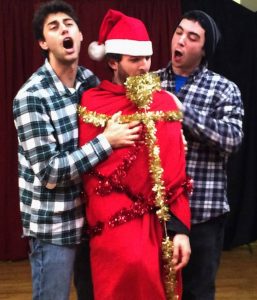 On the second floor of a nondescript building in midtown Manhattan, metal folding chairs lined the walls of a drab classroom-like room. The audience was sparse and could have been waiting for a high school play or amateur improv show to begin. In fact, we were waiting for Bad Quarto Productions' The Second Shepherds’ Play, directed by Derek Peruo, and it turned out the actors had real talent, which they proved immediately while performing a pre-show concert that blended traditional medieval English music with Christmas carols.

The Second Shepherds’ Play is a medieval mystery play that is both farcical and serious, and is part of a larger series of works known as the Wakefield Mystery Plays, believed to have been performed in England in the late Middle Ages. It tells the tale of three shepherds, Coll (Jessica Webb), Gib (Andre Silva), and Daw (Stephen Zuccaro), and opens with the three of them in their pasture, complaining about the weather, their wives, and their low lot in life. The language is Middle English and employs a unique rhyme scheme that is pleasing to the ear and punctuates the comedy. Language like this can be difficult for actors to pull off—they have to buy into what they’re saying even if it sounds like nonsense. Silva, playing the second shepherd, appeared especially at ease with his dialogue, taking the time to connect with the audience. Webb and Zuccaro performed skillfully as well.

It’s Mak, played by Nicholas Corda, who has the best lines in the play. He describes his wife as “a foul sweetheart,” and complains about her giving birth to too many children. Mak is a thief, and eventually tricks the shepherds in order to steal one of their sheep. He is quickly caught and swiftly punished, and immediately afterward, an Angel of the Lord (also played by Corda) appears to tell the shepherds that Christ has been born. They rejoice and offer gifts to Mary, the Blessed Virgin (Courtney McClellan) when she appears with her baby swaddled in her arms.

Bad Quarto Productions stages their shows as they were done in the Middle Ages. The actors didn’t meet in person until the day of their first performance, and the characters engaged with the audience throughout, making lots of eye contact during longer stretches of speech, and encouraging us to sing along to musical numbers.

With a running time of just 45 minutes, the ensemble cast ended The Second Shepherds’ Play as energetically and musically is it had begun.

Michele DeBella is a freelance writer who loves traveling to far away places, but also discovering adventures close to home.