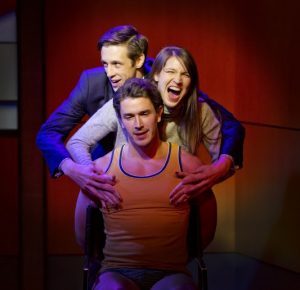 Let's not call this a “play”, because it only marginally meets that criteria. "Sex Tips for Straight Women from a Gay Man", written by Matt Murphy and directed by Tim Drucker, is part improv, part cabaret, part silliness -- and mostly just a night of fluffy fun.

The storyline, such as it is, involves a college lecture on a book -- the real life book by Dan Anderson and Maggie Berman on which the play is based. The lead professor is Robyn, played by Lindsay Nicole Chambers, something of a stuck-up and sexually insecure librarian type. In sashays the author, Dan (played by the absolutely brilliant Jason Michael Snow), who takes over the show and, chapter by chapter, helps bring frumpy Robyn back to live and love and, well...sex of course.

The foil for all this sex is the teacher's assistant, a hunky, muscle-bound, foreign language-speaking young man that Robyn has the hots for. Jason Michael Snow, the show's standout, handles the improv with masterful aplomb.  In truth, Mr. Snow is the show, with his quick wit and deft handling of every type of humor including physical comedy, including a spot of cross-dressing. Despite its title, and its actual content, the feeling of the evening is light and easy. The sex talk, which can get graphic, is treated with humor and light-heartedness that eases most people past any hang-ups they may have. (Though in truth, those with too many hang-ups might just as well go elsewhere, anyway.)

At points, it felt as though the show were just trying to stretch a 45-minute concept to as close to 90 minutes as it could get.  Regardless, go for the laughs, have a good time, and BTW, many of the tips are rather on target as well!