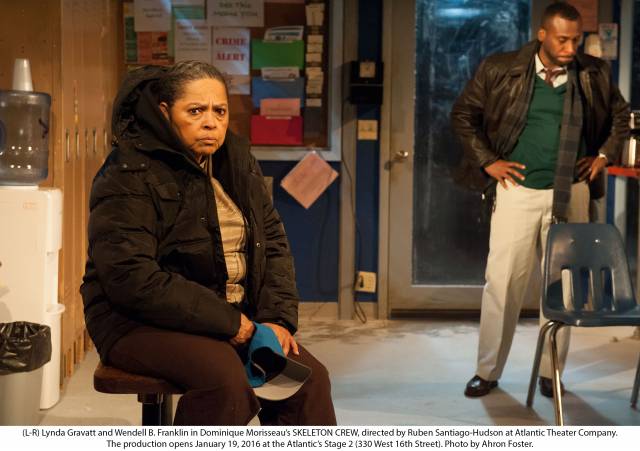 In a locker/meeting/breakfast/lunch/living room of a car manufacturer in Detroit, signs cover the walls: “No Gambling”; “No Smoking”; “No Playing Music”. A strict “stop and search policy” is enforced upon the workers passing through the room each day.

But Faye (Lynda Gravatt) is in her 29th year on the job; she lights up a cigarette the minute she enters the room. Dez (Jason Dirden) throws his bag in his locker and hums along to the tunes coming from a stereo. He turns his baseball cap, grabs a reflective vest and splash protection goggles, and faces Shanita (Nikiya Mathis), who is pregnant and has her arms wrapped around a book with the title African American Names. The door flies open and Reggie (Wendell B. Franklin) asks everyone to listen up for the newest rules and regulations the management has come up with. While he puts up a new sign -- “No Stealing” -- the hammering and hissing of the machines on the assembly lines provide the soundtrack for the drama to unfold.

Skeleton Crew, directed by Ruben Santiago-Hudson at the Atlantic Theater Company, is the third and final play of Dominique Morisseau's "Detroit Trilogy."  The play brings us back to the early months of 2008.  Like many others in the region, this plant is on the verge of extinction; unemployment looms, coffee is the only thing keeping everyone running, and conflict between the workers is always present. Dez dislikes the team, suspicious of everyone and particularly prone to fighting with Reggie. Both are from the same background, descendants of black migrants who came to Detroit at the beginning of the 20th century; but Reggie is Dez's supervisor, and so the two are divided.

Yet for each of the protagonists, the locker room becomes a home and church.  The spirits of the automotive industry are asked for their goodwill to make a future for Shanita and her unborn; and confessions of buried sorrow and financial hardship, loss of beloved ones, and the dawn of a new, uncertain era push each character to make life-changing decisions.  Lynda Gravatt as Faye carries the play with her superb portrayal of a woman who has been in the long-term marriage with the factory. She is a relic of an older time, one of the many who gave their lives to the automotive industry: working like robots in the dust on the manufacturing line during the day, and smoking and drinking and dancing and making love in the backseat of a car in the evenings and on weekends. Adesola Osakalumi performs a daily pop-lock routine on the machines - he could have go on for the rest of the show, stunning to watch and enthusiastically applauded.

Upper management is absent from the stage, never named, and yet their oppressive presence can be felt.  The playbill speaks of “working class warriors that keep our nation literally and figuratively driving forward”; it is now 2016 and Black Lives Mattered not just on Martin Luther King Day, but tomorrow and next week and all the upcoming years. The Skeleton Crew might work somewhere else in the years to come, but it will work as a unit, as a family.