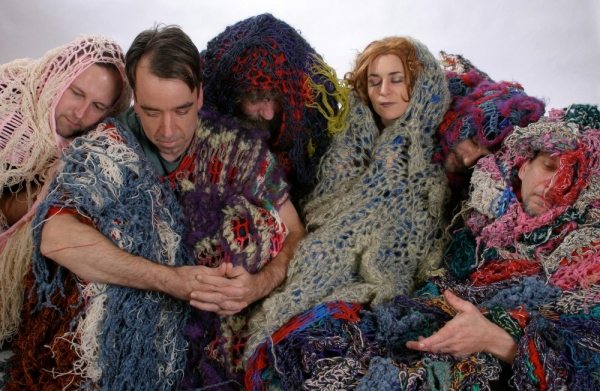 At the time of its publication in 1914, Gertrude Stein’s Tender Buttons elicited highly polarized reactions. The work of short prose poems, which is divided into three sections (“Objects”, “Food”, and “Rooms”) explores mundane objects with experimental language, such that the objects become unfamiliar to the reader. Take, for instance, the first and most well known subsection, “A Carafe, That Is A Blind Glass”:

“A kind in glass and a cousin, a spectacle and nothing strange a single hurt color and an arrangement in a system to pointing. All this and not ordinary, not unordered in not resembling. The difference is spreading.”

To some, this approach and this work is a Modernist masterpiece, a significant revolutionary work of Cubist literature. To others, it is simply nonsense, a jumble of gibberish masquerading as art. The same could arguably be said, one hundred years later, of the Van Reipen Collective’s “spectacle in three parts”, which approaches and creatively dramatizes Tender Buttons.

“Objects”, the first of three spectacle installments, is billed as a “dark comic Americana operetta”. Under the direction of Gary Heidt, the VRC approached the piece by placing the text of objects within a narrative with twelve characters. The narrative, which is bizarre and uncanny itself, begins with three central women. Lady Forthright and Lady Rrose, who play opposite one another, reflect poles of femininity and masculinity, channeling the lesbian overtones and exploration of female sexuality within Stein’s original text (Lady Rrose, played by Kyungmi Lee, is dressed in a suit, while Lady Forthright, played by Debra Disbrow, wears a red ballgown). A third woman, Lady Crone, is elderly and seems sickly and weak. The three women live in an aquarium (which goes unexplained throughout the show), and are cared for by two hospital aid-like “staff members” (Sanae Buck and firehorse the dj). As the plot (which must be followed along in the program if it is to be understood) continues, a melodramatic drama unfolds, with a young man, Cyrus, Lady Crone’s only living relative, and his betrothed, Lady C, a Bjork-esque amphibious figure who arrives at the aquarium in a box. A lecherous, crazed Reverend serves as the main antagonist, and subplots of political intrigue, blind hatred, rivalries, betrayals, murders, and justice (or the lack thereof) unfold. On stage, the actors moved in a set of hanging yarn, multi-colored, knotted and woven, draped over everything as if it were a very invasive ivy or moss. They were decked out in what can be called the clothing of the uncanny, a hodgepodge of familiar but unfamiliar things (a wetsuit, a halved ballgown), and carried seemingly mundane totem items (a banana, a bag, a clarinet) that became more and less important throughout the play.

Certainly in this work, what’s more important than the content of the plot is how it is presented. The effect is of watching a play in a language you don’t understand: while the words are clearly English and clearly Stein’s, their placement within this narrative distorts and dislocates them, much the way the text of Tender Buttons intends to render the familiar unfamiliar. In that way, it was an interesting and successful piece. Sitting in the audience and attempting to decipher exactly what was going on in this bizarre fever dream of a plot (and, indeed, relying heavily on the synopsis provided for each scene in the play bill) would be frustrating if you tried to follow too closely, to align each spoken piece with a definite meaning. Instead, aided by the melodious, sometimes folksy, sometimes ambient, and sometimes ecstatic live music (arranged by Fist of Kindness) and the skilled, nuanced, and passionate singing and movement work of the actors, the viewer moves into what is at once a deeper and more vague process of experiencing the performance as it comes at them. This aim, it could be argued, is shared by all devotedly cubist work. The Van Reipen Collective has created a work that is at once a drastic re-imagining and, perhaps for that very reason, a fitting tribute to Stein’s Tender Buttons.